Published by
Ana M. López,
Jul 13, 2021
Technology has allowed people to have the world at their fingertips, however having access to it without the need to move has come with a price, namely a more sedentary lifestyle. The physical activity that was a natural part of daily life in the past is now something that individuals are willing to invest additional time and money in. In fact, in Latin America, the expenditure in the fitness sector reached about 5.9 billion U.S. dollars in 2018, with Brazil and Mexico being the countries with the highest investment in recreational physical activities.

According to a survey conducted in 2020, in Brazil about 36 percent of respondents said they had spent money on gym memberships and online fitness services over the year. A similar tendency was observed in Mexico. How much people spend on fitness, though, varies between countries, or even cities. While the average cost of a monthly gym membership in Rio de Janeiro and São Paulo, the two largest Brazilian metropolises, ranged from 30 to 36 U.S. dollars in 2019, in the Mexican capital such offer exceeded 67 dollars. Moreover, fitness consumption seems to be increasingly developing outside of these spaces, as emerging platforms and online alternatives seek to persuade users that exercise can be done anywhere and at any time.

The increasing role of technology

As technology has transformed every aspect of human life, the world of exercise has not fallen behind. In recent years, several Latin American fitness influencers have built up a large audience on social networks. An example of this is Venezuelan model Michelle Lewin, who in 2020 surpassed 13 million followers on Instagram. On the other hand, although the eServices market had also been experiencing a growing popularity, 2020 undoubtedly marked a turning point in the adoption of wearables and apps for sports use. With lockdowns and restrictions imposed to contain the spread of COVID-19, many people in Latin America had no choice but to work out from home. As a result, downloads of health and fitness apps in Brazil and Mexico saw an increase during the first weeks after the announcement of emergency social distancing measures. From wearables and apps aimed at exercising, to the social media influencer craze, the fitness industry has been unable to escape the digital era.

In the following 4 chapters, you will quickly find the 30 most important statistics relating to "Fitness industry in Latin America". 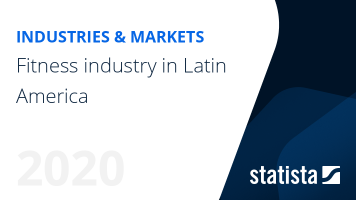 The most important key figures provide you with a compact summary of the topic of "Fitness industry in Latin America" and take you straight to the corresponding statistics.

Ana M. López
Research expert covering travel, tourism and hospitality
Get in touch with us now