Published by
T. Ozbun,
Jul 13, 2022
With a revenue of over six billion euros the Italian cheese industry is one of the biggest in the European Union. Apart from the production of milk, making cheese from cow milk is the biggest sector in terms of volume. The production capacity of cow cheese has gradually increased in Italy. Most of the production volume is made up by hard cheese, as Italy is the birthplace of Grana Padano and Parmigiano Reggiano, both commercialized with the PDO quality label (Protected Designation of Origin), which indicates their specific origin and production's characteristics.

As of 2020, approximately 18.2 thousand tons of Pecorino and Fiore Sardo were exported worldwide from Italy. Their popularity is also acknowledged among Italian consumers, with 44 percent indicating Parmigiano Reggiano as their favorite cheese in 2020. Grana Padano followed in the ranking with slightly less than 40 percent.

As far as the import of cheese into Italy is concerned, Germany is an important trade partner of fresh cheese, while Belgium is the leading exporter of processed cheese to Italy. Additionally, most of the hard cheese imported by Italy comes from Eastern Europe, with the Czech Republic outpacing Poland and Hungary in terms of volume.

The Italian population consumes nearly 1.3 billion tons of cheese every year, while the consumption per capita of cheese reaches to about 22 kilograms. In 2019, cheese and dairy products accounted for 61 percent of the domestic spending on dairy food category, while 13 percent of the overall spending was allocated to yogurt.

In the following 5 chapters, you will quickly find the 31 most important statistics relating to "Cheese industry in Italy". 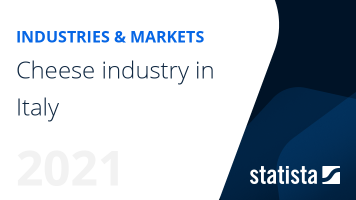 The most important key figures provide you with a compact summary of the topic of "Cheese industry in Italy" and take you straight to the corresponding statistics.