Constant technological advancements are reshaping numerous aspects of people’s lives, including the way they spend their free time, consume news, and keep in touch with their friends and family. In 2021, over 90 percent of Hungarians were internet users, and since social media usage became one of the most popular online activities, the majority of connected citizens also had accounts on social networks.
As of July 2022, more than 7.3 million Hungarians had a Facebook account, making it the most widely used social network in the country. The Hungarian version of Facebook was launched in 2008 and quickly gained popularity. Its use was so extensive and an almost essential part of people’s everyday lives that for many it became the primary channel of communication. In 2020, when asked about the main reason for using Facebook, most of the respondents stated that keeping up with current events and getting all kinds of information about their acquaintances were the biggest advantages.

While using Facebook is common in most age groups, Instagram usage seems to be more typical for the younger generation of Hungarians. Even if Instagram, the primarily photo-sharing platform, is used by a smaller number of people than Facebook, in recent years it has become an inevitable marketing channel, not to mention the evergrowing role of influencers. In March 2022, the model, Barbara Palvin had the highest number of Instagram followers in Hungary, counting nearly 17 million.

According to a study, in 2021, Hungarians’ main reason for following influencers was gathering information and ideas. According to the same survey, Hungarians mainly followed influencers' recommendations considering technology and electronic devices or health and lifestyle. Compared to other countries, Hungarian influencers had a considerably high engagement rate on Instagram in 2020, especially the ones with under five thousand followers.
This text provides general information. Statista assumes no liability for the information given being complete or correct. Due to varying update cycles, statistics can display more up-to-date data than referenced in the text.
Published by Flora Medve, Aug 5, 2022

Number of social media users in Hungary 2020, by platform

Most popular Hungarians on Instagram 2022, by number of followers 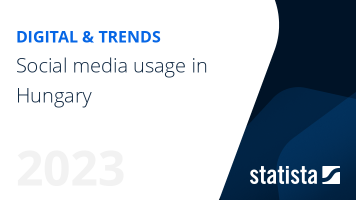 The most important key figures provide you with a compact summary of the topic of "Social media usage in Hungary" and take you straight to the corresponding statistics.