In 2020, Russians were the most active social media users in Europe, by averaging nearly two and a half hours per day. While WhatsApp remained the most used messenger application in the country, Vkontakte was social platform with the largest volume of monthly publications. YouTube, on the other hand, positioned as the most popular video platform with a penetration rate of over 80 percent.

Over a decade after Facebook launched, its Russian analog Vkontakte was based in Saint Petersburg and soon outperformed the former on the Russian market, with an estimated user volume to exceed 70 million by 2025. In terms of demographics, 25- to 34-year-olds represented the largest user share for both platforms. However, Facebook was more popular in Moscow, while Vkontakte accounted for the largest user share in its hometown and the country's second-largest city - Saint Petersburg.

Instagram's popularity has been on the rise in past years in Russia, reaching over 64 million users in February 2022. LinkedIn exceeded Snapchat and Twitter by user reach, while Twitter enjoyed the a marked superiority of male presence. As for emerging social media platforms, TikTok’s audience shifted from being largely represented by teenagers in its early years of existence, to more frequently used by older generations as of August 2021.

WhatsApp, Viber, and Telegram are the top-3 most employed messengers In Russia. By August 2021, WhatsApp was the frontrunner with roughly 77 million monthly active users, while the Russian-founded Telegram accounted for over 37 million users. Facebook Messenger reported a relatively lower penetration rate and was mostly used by the middle-aged population. Snapchat is reported to steadily gain an audience over the coming years, reaching 5.5 million by 2025.

This text provides general information. Statista assumes no liability for the information given being complete or correct. Due to varying update cycles, statistics can display more up-to-date data than referenced in the text.
Published by A. Melkadze, Nov 23, 2022

Ranking of social media platforms in Russia 2022, by monthly publications

Share of Vkontakte users in Russia 2022, by age group 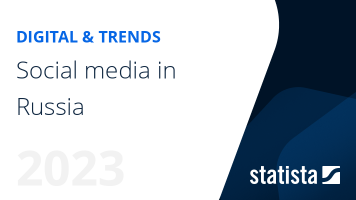 The most important key figures provide you with a compact summary of the topic of "Social media in Russia" and take you straight to the corresponding statistics.