Telegram, launched in Russia in 2013 by Nikolai and Pavel Durov who also founded VK, is an increasingly popular instant messaging platform. Telegram was the third most downloaded messenger app worldwide, following WhatsApp and Snapchat. Based on downloads, India, Russia, and the United States were the app's leading markets in 2022. The platform is operated by Telegram FZ-LLC, a company based in Dubai. Telegram's CEO Pavel Durov was the third richest social media billionaire, as his net worth exceeded 15 billion U.S. dollars.

How is Telegram different from other messaging apps?

Telegram positions itself as an end-to-end encrypted platform, which is why thousands of users of WhatsApp, a messenger by Meta, switched to it in January 2021 when WhatsApp updated its privacy policy. As a result, the market share of Telegram increased by six percent in the first quarter of 2021. Telegram users can create secret chats, send self-destructing messages, follow channels, and join groups. Furthermore, developers can launch bots, automated programs that send messages in chats. Telegram is also used as a marketplace, as it allows users to collect money directly on the platform using its integrated payment bots. In 2021, 16 percent of Russian C2C buyers purchased on Telegram.

Telegram switched to freemium in June 2022 when it introduced paid subscriptions. Paying users received additional features, such as double the amount of channels they could follow, faster download speed, and premium stickers. In October 2022, the in-app revenue of the platform, reduced by fees and taxes, exceeded one million U.S. dollars, with the largest share coming from iOS users. Telegram does not sell advertisements on the platform.

In 2018, Pavel Durov announced that Telegram planned to launch a blockchain platform TON (Telegram Open Network) with its own cryptocurrency, Gram, which raised 1.7 billion U.S. dollars in investor funds. However, the U.S. Securities and Exchange Commission (SEC) blocked it in 2019, making Telegram return money to its investors. The latest deal in March 2021 raised one billion U.S. dollars from Mubadala and Abu Dhabi Catalyst Partners. In November 2022, Telegram allowed users to buy and sell usernames using the allegedly independent cryptocurrency Toncoin on the platform Fragment.

Telegram has been used during protests around the world, including in Belarus, Hong Kong, South Korea, and the United States. The app's usage is currently banned or restricted in several countries, including China, Iran, and India. Furthermore, Telegram was temporarily banned in Brazil and Russia. The app faces criticism because it is reported to have been used by right-wing extremist organizations. Following the invasion of Ukraine, the Russian government blocked Facebook, Instagram, and Twitter in the country, after which thousands of users switched to Telegram.
This text provides general information. Statista assumes no liability for the information given being complete or correct. Due to varying update cycles, statistics can display more up-to-date data than referenced in the text.
Published by Statista Research Department, Nov 21, 2022 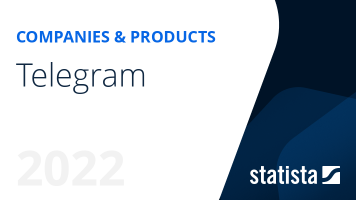 The most important key figures provide you with a compact summary of the topic of "Telegram" and take you straight to the corresponding statistics.