Snapchat, owned by Snap Inc., is a mobile photo and messaging app released in September 2011 by Evan Spiegel, Bobby Murphy, and Reggie Brown. The app was made with the novel intention of being able to share impermanent photos via private message. Known as ‘snaps’, the user specifies the amount of time an image can be viewed before becoming inaccessible. Although being able to send temporary pictures was the initial concept, video became an important and popular element not long after creation. Snapchat also introduced the idea of "stories" in which content remains available for just 24 hours before disappearing. Many other social platforms have adopted this concept since.

Snap Inc. is located in Santa Monica, California, and rebranded from Snapchat to Snap Inc. in 2016. In 2021, Snap Inc.’s global annual revenue was just over 4 billion U.S. dollars, up from 2.5 billion U.S. dollars in the previous year. Overall, Snap’s global annual revenue has seen steady increase over the years. In terms of global net income, the final quarter of 2021 saw the company’s first quarter of positive change since going public, with a positive result amounting to 22.55 million U.S. dollars. Additionally, the social photo and video app had an average revenue per user of 4.06 U.S. dollars worldwide in the fourth quarter of 2021. The vast majority of Snapchat’s revenue was generated in North America.

In 2021, Snapchat had approximately 428 million users worldwide. The number of users is expected to exceed 500 million by 2025. As of January 2022, India was the country with the largest Snapchat audience overall, with around 126 million users. The United States ranked second with 107 million users and France followed with 24.2 million users. Globally, women are more likely to use Snapchat, with 53.8 percent of users being female as of January 2022. For Instagram, Facebook, LinkedIn and Twitter, the female user base is noticeably lower, all being under the 50 percent mark. Overall, Snapchat is most popular with 18 to 24 year olds, however, in this age group, gender distribution is equal. Gen Z are slightly less likely to use Snapchat than Instagram or TikTok. Snapchat’s fall in popularity with this generation of users correlates directly to the rise of TikTok usage. In the U.S, Snapchat is the third most popular social media app amongst Gen Z users, after YouTube and Instagram.

As of the beginning of 2022, Facebook, YouTube and WhatsApp were the most popular social networks worldwide when compared by number of monthly active users. Snapchat ranked in twelfth place in terms of audience size, followed by Telegram, Pinterest and Twitter. In addition, Snapchat’s year-on-year audience growth from 2021 to 2022 was 11.8 percent. Snapchat was the sixth most downloaded app worldwide in 2021 and on average, worldwide users spend three hours per month on the app.
This text provides general information. Statista assumes no liability for the information given being complete or correct. Due to varying update cycles, statistics can display more up-to-date data than referenced in the text.
Published by S. Dixon, Jan 9, 2023

Country with the highest Snapchat audience reach in 2022
Luxembourg

Country with the most Snapchat users in 2022
India

Countries with the most Snapchat users 2022

Snapchat: distribution of global audiences 2022, by age and gender 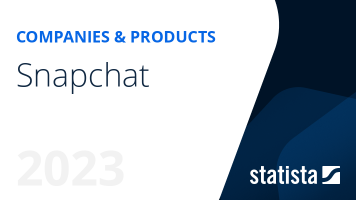 The most important key figures provide you with a compact summary of the topic of "Snapchat" and take you straight to the corresponding statistics.