French people are accessing the internet more frequently and through any device. With developments in mobile technology, the smartphone has reached a wide audience, especially within younger generations. Today, 77 percent of the population uses the internet daily and spends over five and a half hours online. Sending pictures or messages has never been easier - 78 percent of smartphone owners use instant messaging services. Facebook and Facebook messenger are market leaders, with a revenue of about 11.62 thousand U.S. dollars on the Google Play store in January 2021. The largest user group of instant messaging apps were aged 18-24, a generation which is known for its dexterity with technology.

Emerging messaging apps and their users

Facebook is facing increasing criticism regarding data protection issues. Meanwhile, Telegram has asserted itself on the market. As this app promises privacy (like all apps), open conversation channels are becoming popular, and the other side of social platforms dubbed "dark social" has emerged in neighboring countries. This involves sharing information over social media and messaging services that cannot be measured or traced by web analytics. Signal is another messaging app that has reached France, reaching the top of the ranking of most downloaded communication apps on the Google Play store in February 2021. The share of telegram and Signal downloads has been rising in the past years, confirming that users are looking for alternatives to mostly Facebook-owned services. Other types of messaging services such as Discord have served a purpose for the gaming community.

Instant messaging does not stop at texting. WhatsApp, Telegram, but especially Viber and Skype are services that have specialized in telephony. 51 percent of the French population is making phone calls though such apps. Viber encountered a peak in downloads with more than 94 thousand downloads in July 2020 on the Google Play store and Skype as much as 30 thousand downloads on the Apple store in 2021.
Brands are starting to build interactive personalities through an increased presence on social media, which serves as an exchange platform between a potential consumer and the business. In terms of customer management, many companies have implemented a chat and chatbot function. Especially in banking, a study had reported that 42 percent of retail banks already offered chatbots in 2019. But clients seem to have an aversion against the robotization of help mechanisms. 56 percent of respondents to a survey said that they never have and never will want to use the help of a chatbot.
For internal business communication, Skype was the leader in 2019. Applications such as Microsoft Teams or Zoom have also gained in popularity, a phenomenon that is due to a restructuring of the working environment following the coronavirus (COVID-19) lockdown measures introduced in France in February 2020.
This text provides general information. Statista assumes no liability for the information given being complete or correct. Due to varying update cycles, statistics can display more up-to-date data than referenced in the text.
Published by L. Ceci, Oct 19, 2022

Average daily internet & social media use in France 2020, by device

Leading messaging apps and services in France 2021, by reach 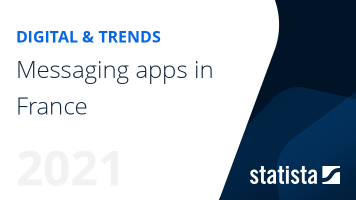 The most important key figures provide you with a compact summary of the topic of "Messaging apps in France" and take you straight to the corresponding statistics.