The world of mobile messaging has changed in recent years, making the move from purely utilizing text messaging as its main feature and introducing voice and video to create a smoother, faster way to communicate. The results are positive, and as of 2020, there was an estimate of 2.77 billion mobile phone messaging app users worldwide, a number anticipated to reach three billion by 2022.
Whilst there are multiple messaging apps available, Facebook Messenger, also known as simply Messenger, has made its own mark on the industry and data shows that it is widely used across the globe, particularly in the United States. In 2020, there was an estimate of over 146 million mobile messenger app users in the United States. Messenger audience data from January 2021 shows that 25 to 34 year olds accounted for the largest group (24.6 percent) of Facebook Messenger users in the United States.

As of one the most popular social networks and messengers worldwide, Facebook Messenger belongs to Facebook's exclusive billion-dollar-user club (other members are the core network Facebook, Instagram, and Whatsapp). Recent data shows that Facebook Messenger is one of the leading social networking app in the United States, with over two million monthly downloads in the Apple App Store. Although WhatsApp remains the most popular mobile messenger app, with two billion monthly active users globally, in the United States Facebook Messenger is the most popular mobile messaging app in terms of number of users. With about 106 million monthly active U.S. users as of September 2019, the app far surpasses Snapchat’s user base of 46 million and despite WhatsApp’s global popularity, the company ranked third with 26 million active users each month in the United States.

Despite there being obvious room for improvement in certain areas, Facebook Messenger arguably has a lot to offer to its users. Chat apps are becoming more than simply communication channels – whether for personal or professional reasons, the reasons we use messaging apps are changing, and in turn altering how we use our devices.

As the way we use messaging apps changes, companies providing these facilities must adapt and stay ahead of the curve. It is important to ensure not only safety and security when making online transactions via apps, but also to keep up with the fast-paced nature of online communication and take note of what users want, and so far, Facebook Messenger is in a strong position.
This text provides general information. Statista assumes no liability for the information given being complete or correct. Due to varying update cycles, statistics can display more up-to-date data than referenced in the text.
Published by S. Dixon, Feb 8, 2022

Media usage in an online minute 2022

Average time spent per day with mobile messaging apps in the U.S.
24 minutes 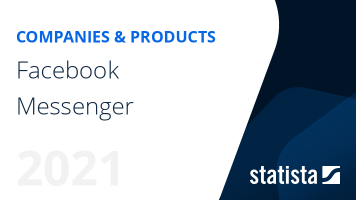 The most important key figures provide you with a compact summary of the topic of "Facebook Messenger" and take you straight to the corresponding statistics.