Published by
Raynor de Best,
Dec 13, 2021
Apple Pay is the payment service from Apple, allowing using to make in-store payments with apps on mobile iOS devices or online with web browser Safari. An important characteristic of this payment option is that it only exists on devices built and sold by Apple itself – meaning Apple Pay is unavailable on Android. Despite this, Apple Pay achieved a significantly higher market share in the United States in 2020 than Google Pay. This interest is reinforced in Statista's Global Consumer Survey: Five out of 10 U.S. respondents indicated they had used Apple Pay in a store or restaurant between August 2020 and August 2021 - with an additional two out of 10 respondents saying they used the payment option in online shopping. From the 17 countries under observation, U.S. Apple Pay penetration only ranked behind the United Kingdom - with six out of 10 UK respondents using the Cupertino payment method in-store. Unlike the United Kingdom - where Apple Pay is one of the few mobile payment methods available - Apple Pay competes against PayPal, Venmo, and Zelle in the United States.

How many users does Apple Pay have exactly across various countries in the world? Apple itself does not share this information, although there are estimates that the number of iPhone users that activated Apple Pay grew by more than 65 million people in 2020. This same estimate also assumes active iPhones grew by nine percent during 2020, alongside a worldwide increase of contactless payments in the wake of the COVID-19 pandemic. In 2021, China had the highest penetration rate for in-store mobile payments in the world – although it is unlikely Apple Pay plays a major role here given the local popularity of apps like Alipay and Tenpay.

Mobile payments: what, and where?

Mobile payments are cashless payments performed exclusively with a mobile device. This includes payments done with so-called wallets on a smartphone – like in a brick-and-mortar store with Apple Pay, or during an online purchase with PayPal from home. The market size of these mobile wallet transactions is predicted to double between 2020 and 2025 in North America, although the Asian market is forecast to be significantly bigger. One notable type of mobile payment that is set to grow is that of QR codes: QR codes were used more in Europe than in Latin America in 2020, but the LATAM region is expected to have overtaken Europe markedly in 2025. Mobile payments, however, also includes transactions through telecom networks and SMS formats. These so-called mobile money transactions are popular in Africa – where most people do not have access to financial services but do have a (smart)phone.

In the following 3 chapters, you will quickly find the 15 most important statistics relating to "Apple Pay".

The most important key figures provide you with a compact summary of the topic of "Apple Pay" and take you straight to the corresponding statistics.

Mobile payments in the UK 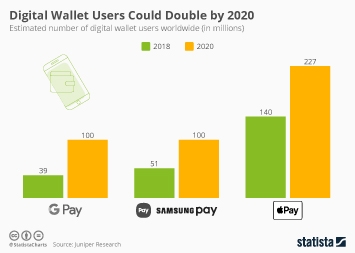