Social media gained more popularity over the years, especially after the coronavirus (COVID-19) pandemic isolated many people at home, with less chance to physically socialize. For many individuals, it became one of the main tools for communication, entertainment, information, and keeping in touch with friends, relatives, famous people, and brands.
Social media usage in Turkey also increased constantly, attracting more users annually. According to the Statista Digital Market Outlook, the number of Turkish social media users will reach over 76 million in 2027. Especially for most teenagers and young adults, accessing social media platforms has become the sole purpose of internet use in recent years.

Although it showed a decreasing trend recently, Facebook held more than half of the social media market share, which made it the market leader in the country. Furthermore, the popular messaging app WhatsApp became the most used platform by Turkish social media users, accounting for a 93 percent penetration rate. Aside from WhatsApp, internet users prefer using many other social media sites and applications for different purposes. The video-sharing website YouTube came in first in the ranking of most popular social networking services among Turkish people, while the photo and video-sharing application Instagram placed second.

During the COVID-19 pandemic, staying at home with social distance restrictions, feelings of loneliness, and a desire to be in touch with loved ones caused people to spend more time on social media channels. Turks were no exception to this, using social networking services mostly to follow family and friends. Moreover, the wide spread of social media affected individuals to start using it for following and reading news and articles besides mainstream media outlets. For more than half of the population, reading news stories was a pressing reason to use social media. Although some people decided to stop using social media or took a break from it for various reasons, it seems that social media platforms will keep their popularity among Turkish people in the near future.
This text provides general information. Statista assumes no liability for the information given being complete or correct. Due to varying update cycles, statistics can display more up-to-date data than referenced in the text.
Published by Zeynep Dierks, Aug 1, 2022

Leading social media and messaging platforms for news in Turkey 2022 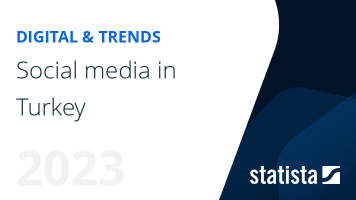 The most important key figures provide you with a compact summary of the topic of "Social media in Turkey" and take you straight to the corresponding statistics.