88.9k
In most developed countries, people take their back accounts for granted. Their money is held securely, there's always an ATM close at hand and digital payments are making life so much easier. For an estimated 1.7 billion adults worldwide, however, financial inclusion is still out of reach. That's the number of people without a bank aaccount in 2017, according to the World Bank. As surprising as that mammoth figure is, things are improving with 1.2 billion people getting access to banking since 2011 - over 500 million in the past three years alone.

Banking has obvious advantages such as not having to hide money around the house. It also connects people to the global financial system and allows them to build up their assets. Considering the vast amount of people that are still disconnected, where are they all actually living? The World Bank's data shows that the situation is worst in developing countries, particularly across Africa and Asia.

Even though China's economy has made giant strides, it still has 224 million inhabitants without a bank account. In India, the number stands at 191 million while in neighboring Pakistan, it is just under 100 million. These countries will be aiming to get more and more people access to banking in the near future. As well as the advantages mentioned above, banking is also key for the economy as it prompts investment and makes it easier for an account holder to open or expand a business. 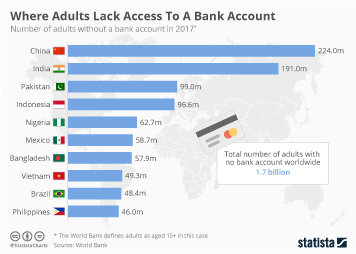 This chart shows the number of adults without a bank account in 2017.