53k
74.6k
87k
88.9k
Coming from the Netherlands, the German Autobahn is like a dream: hundreds and hundreds of kilometers of asphalt to be conquered at a sweeping 180 km/hour or even faster in some places. But are the German roads anywhere close to being the best in the world?

The World Economic Forum's new Global Competitiveness Report allows us to compare the countries with the best quality of roads and the best road connectivity. According to this report, Singapore has the world's best road quality, followed by Switzerland and the Netherlands. When it comes to the extensiveness and condition of the roads, these countries do not have their equal, all scoring between 6.4 and 6.2 out of 7.

They however do not do quite as well on the Road Connectivity Index, which indicates how easy it is to get from A to B and how fast you can reach your destination. Singapore is not included in this index, but Switzerland and the Netherlands come in 40th and 24th place respectively. The United States, 11th in the road quality ranking, tops the Road Connectivity Index, before Saudi Arabia and Spain (30th and 13th in the other ranking, respectively).

France is the only country appearing in both lists: it comes 7th in the road quality ranking, and 9th in the road connectivity ranking. So, in which country can we find best roads in the world? It all depends on your definition! Singapore, the United States or maybe even France? 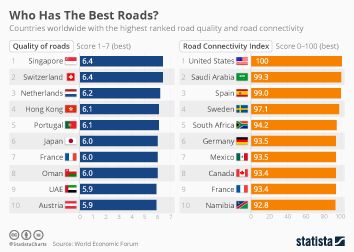 This infographic shows the countries worldwide with the highest ranked road quality and road connectivity.