40k
57k
41k
9.6k
Since its first edition in 2016, the Best Country Ranking by U.S. News and World Report has made headlines, mainly in countries rejoicing to be named among the best countries to live, work and invest in. The report was published in its fourth edition yesterday and while most countries can look back at a stable record among the top 10 best countries, the U.S. has lost most ground against its competitors. Since 2016, it has lost four ranks, falling from rank 4 to rank 8. Germany has suffered a loss of three ranks, while the U.K. and France both lost two.

The Best Countries Report might come to pretty broad conclusions but is based on a complicated metric. The ranking is based on a survey of 20,000 people who are asked to attach a total of 65 attributes to different countries around the world, including questions on citizenship, cultural influence, entrepreneurship, business and quality of life. Purchasing power and predicted GDP growth are also considered. While the answers might often be subjective, they paint a picture of how desirable people around the world find certain countries.

Switzerland tops the list for a third year in a row. The makers of the report attribute the country’s success to respondents continuously associating the country with economic stability, access to capital, a strong legal system and prestige. The country’s reputation as a neutral and stable place “resonated internationally in today’s age”. 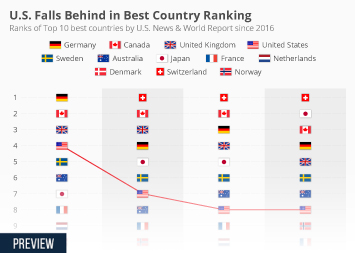 This chart shows the top 10 countries of the Best Countries Report by U.S. News and World Report from 2016 until 2019.