40k
57k
41k
9.6k
The fate of a halloumi cheese trademark is being discussed in an EU court today after a Cypriot-owned British business has challenged the EU protected status of the squeaky cheese and almost got away with it. According to its EU collective community trademark, halloumi can only be produced in Cyprus and under certain conditions.

Despite the halloumi being considered one of the treasures of Cypriot cuisine, the country’s bureaucrats have – embarrassingly – missed court deadlines to keep the trademark in the UK for after the country leaves the EU. But the company who successfully snatched the UK trademark, Pascalis Ltd., did not stop there. The biggest importer of white cheese in the UK filed again, now trying to have the entire EU trademark thrown out.

Cyprus has also applied for EU “Protected Designation of Origin” (PDO) status for the cheese, but while the court battle about the trademark rages on, the proceedings are on the rocks. PDO status provides wider protections than the collective trademark, held officially by the Foundation for the Protection of the Traditional Cheese of Cyprus, and has the potential to better protect the status of the halloumi from future attacks. But for Cyprus, the attempt to gain PDO status might be “too little, too late” if it can’t hold on to its trademark.

Within the EU, there are hundreds of products of protected origin (PDO), the stricter of the two labels, and protected geographical indication (PGI for food, drinks and beer and GI for wine and spirits). Our chart only shows some of the best known. Further notables are Gorgonzola and Parmesan cheeses (PDO) from Northern Italy, Roquefort and Beauford cheeses (PDO) from France and Stilton cheese (PDO) from the UK. Other cheeses are considered generic by the EU and are excluded from the labels, among them gouda, cheddar and camembert. Special varieties can, however, be protected under the scheme. The Netherlands, for example, have been awarded PGI status for the specialty product Gouda-Holland, while the French registered Camembert de Normandie (PDO).

A separate EU label, “Traditional Specialties Guaranteed” (TSG) dictates only the method of production, not the geographical origin (but certainly also gives an advantage to local producers). Notable products under the label are Mozzarella cheese, originally from Italy, and Serrano ham, invented in Spain. 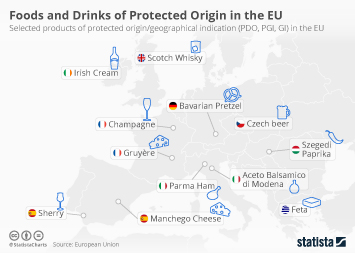