It is often said that politics in the United States is becoming more divided, but how true is this? On one hand, the common picture of a totally polarized, highly partisan electorate belies the fact that over the last ten years more Americans have identified as politically independent than with either of the two main political parties. Moreover, when independents are included as a separate category, the level of support for each party has stayed relatively consistent. On the other hand, a greater deal of fluctuation is seen when independents are forced to choose between the Democratic and Republican Parties though - as is the case in most elections. Compounding this instability is the fact that this group of voters is not fully committed to either party and are not evenly distributed throughout the country, translating into a consistent group of “swing states” that do not consistently vote Democratic or Republican. As these swing states can potentially vote for either party in presidential elections, they are the key battlefields for campaign strategists of both political parties. Of the swing states, Ohio and Wisconsin have been most likely to change their vote since 1960. Ohio has also been the most likely of any state to vote for the final winner of presidential elections, leading many commentators to call it the ultimate “bellwether” state.

It is probably no surprise that identification with political party is correlated to a likelihood of holding certain positions over a key political issue. For example, Democrats are much more likely to favor a single payer healthcare system than Republicans or Independents, and an increasing majority of Democrats hold a favorable view of socialism in general. Conversely, Republicans are overwhelmingly likely to have a positive view of capitalism (compared to about half of Democrats).

Turning to social issues, Republicans are less likely than Democrats to support same-sex marriage or legalizing access to abortion. However, reducing either of these issues to a black or white, Republican versus Democrat framework misses much of the nuance that exists in the political middle. Regarding same-sex marriage, the view of moderate Republicans has consistently been close to that of moderate Democrats, while most Republicans support the legalization of abortions under some circumstances. In other words, both parties contain a wide range of views over issues that can overlap in the center.

Aside from party identification, other factors are often also important indicators of a propensity for certain political beliefs. One such factor is education. For example, people holding a college degree are more likely to support unrestricted abortion rights, and less likely to favor decreasing legal immigration. Age is another important indicator. Younger people are more likely than those over 65 to have sympathy toward undocumented immigrants, and much more likely to be concerned over global warming. However, party identification remains an important factor in most cases, even cancelling out a person’s level of scientific knowledge in the question of whether climate change is caused by human actions.
This text provides general information. Statista assumes no liability for the information given being complete or correct. Due to varying update cycles, statistics can display more up-to-date data than referenced in the text.
Published by Statista Research Department, Nov 17, 2022

Share of U.S. adults who identify as political independents
42%

Number of U.S. states who do not lean towards either the Democratic or the Republican Party
10

Share of U.S. adults who believe the government is doing too much to solve the country's problems
52%

Level of support for government intervention in society in the U.S. 2000-2021

Level of trust in major U.S. institutions 2021, by institution and political party 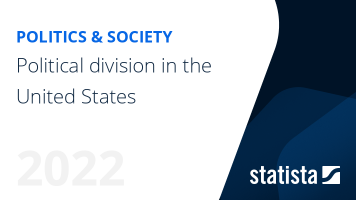 The most important key figures provide you with a compact summary of the topic of "Political division in the United States" and take you straight to the corresponding statistics.