According to official figures collected and supplied to Statista by the Fuller Project, women filed the majority of new jobless claims across several U.S. states in the three weeks following the start of the COVID-19 shutdown. By mid-April, four weeks into the shutdown, initial jobless claims by women also remained well above their usual levels in many states.

Based on the data comprising 17 states in total, the Fuller Project suspects that most new jobless claims in the U.S. since the week of March 21 have in fact been filed by women. The project cites a statistic from Nebraska, shedding some light on the situation of females in the current job market. In the state, most new jobless claims came from waitresses and waiters, hairdressers and cosmetologists, retail salespeople, bartenders and childcare workers – all professions dominated by women in the U.S.

Women in the U.S. are still less likely to work outside the home than men (even though they now hold close to 50 percent of payroll jobs). The Bureau of Labor Statistics has historically seen fewer women apply for benefits (which they tie to the fact that women are normally less likely to lose jobs than men), explaining some of the previous underrepresentation of women in jobless claims. 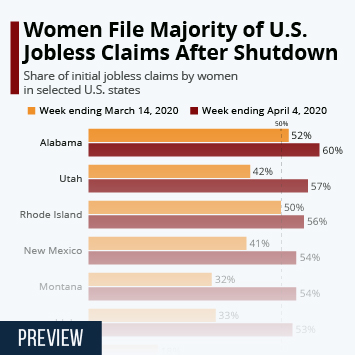 This chart shows the share share jobless claims by women in the U.S. before and after the coronavirus shutdown (2020).