President Donald Trump issued executive orders on Aug. 7 banning popular social media apps TikTok and WeChat from use in the country. The platforms, both owned by Chinese parent companies, have 45 days to sell their U.S. operation before the order takes effect. Trump’s push to ban the social media platforms comes at a time of increasing tensions between the U.S. and China, with mystery around data collection prompting the administration’s latest move. Users of both TikTok and WeChat in the U.S. have been growing by tens of millions in recent quarters, however a new survey last month shows many in the country have no opinion on the ban for these platforms.

The strongest voices in support of TikTok come from free speech watchdogs and the young, teenage demographic that's core to the platform. Still, many seem to be turning a blind eye to the potential ban. While some agree on the dangers of the Chinese government collecting data on U.S. citizens from ByteDance and other parent companies, others' arguments simply revolve around the distaste in the content produced on the app.

ByteDance, the company that owns TikTok, has entertained offers from Microsoft in selling their U.S. division. The Trump administration has given the green light for a possible deal, setting the deadline for Sep. 15, after which TikTok will be permanently shut down in the country.

National security concerns surrounding data collection of private citizens from a foreign country are what the Trump administration said are the reasons for the swift decision. Others see it as a move to limit social media ahead of the November elections. In June, TikTok users coordinated in reserving thousands of seats to a Trump rally in Oklahoma, leading to a wild overestimate of attendees and a largely empty stadium. 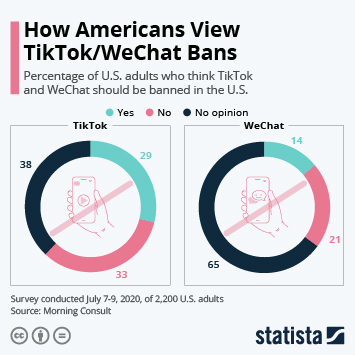 This chart shows the percentage of U.S. adults who think TikTok and WeChat should be banned in the U.S.