Published by Statista Research Department, May 27, 2021
Produced from the seed of the tropical Theobroma cacao tree, cocoa has been cultivated for at least three millennia. This food originated in Central and South America. It dates back to around 1100 BC when the Aztecs made it into a beverage known as Xocolātl or "bitter water" in English. It was not until the Industrial Revolution, when mechanical mills were used to squeeze out cocoa butter from cocoa beans, which is used to produce chocolate, that significant advances in the chocolate-making process occurred.

The volume of cocoa produced worldwide amounts to 4.7 million tons annually. About three quarters of the world's cocoa beans are produced in Africa. African production is about three times the output in the homeland of chocolate, America. The main cocoa bean producing country is the Ivory Coast, followed by Ghana, and Ecuador. The Ivory Coast is also the leading cocoa bean processor, just ahead of the Netherlands.

Overall, the United States is the leading world market for confectionery of any kind. The U.S. cocoa & chocolate market is estimated to be worth 9.67 billion U.S. dollars. The country is also the worldwide leading importer of chocolate and products with chocolate. Imports of this nature amount to almost 3 billion U.S. dollars annually. U.S. consumers ate on average 10.8 kilograms of chocolate per person during the first year of the pandemic. Compared to the year before the pandemic, this was an increase of almost seven kilograms. Mainstream products were the number one driver of chocolate sales growth during the pandemic. Other product groups, such as premium chocolate, could not capitalize in the same manner. The number one brand of candy eaten by American consumers is Snickers. It is estimated that 48.06 million consumers eat the chocolate bar, more than any other.

In the following 5 chapters, you will quickly find the 35 most important statistics relating to "Chocolate industry".

The most important key figures provide you with a compact summary of the topic of "Chocolate industry" and take you straight to the corresponding statistics.

Confectionery industry in the U.S. 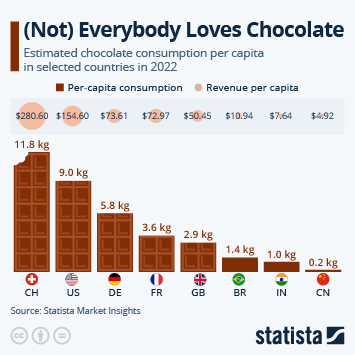 (Not) Everybody Loves Chocolate 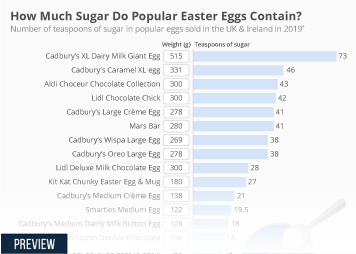 How Much Sugar Do Popular Easter Eggs Contain?