Social media is used for far more than advertising, entertainment, and private communications, as global events attract attention and are frequently followed across most online networks. Social media provides us with a view of the larger global picture and also offers those in challenging situations the chance to address a worldwide audience. Users of social media access platforms to stay current on a variety of issues that regularly impact more than just their local areas.

Following Russia’s invasion of Ukraine on February 24, 2022, many countries began imposing sanctions on Russia and social media companies, such as Meta and Twitter, blocked their services in the country. Between February 24 and March 15, daily active users (DAUs) of Instagram, Facebook, and Twitter decreased. Conversely, DAUs of Telegram increased significantly, from 31.24 million to 45.52 million within a little over two weeks.

The posting habits of Russian-speaking social media authors also saw changes. In comparison to the day of the Russian invasion of Ukraine, on March 24 there were 23 percent more Russian speakers who openly posted, reposted, or commented on Telegram. Material uploaded by Russian-speaking users decreased by 31 percent on Instagram, and 11 percent on Facebook.

In Russia, there are differing views on the prohibition of social networking sites. Nearly 50 percent of Russians between the ages of 18 and 24 said they did not support the blocking of Facebook and Instagram. Only 11 percent of people in this age bracket fully supported the ban. The group most likely to entirely support the ban were those between the ages of 40 and 54.

A way for politicians to communicate with voters

Social media has become a vital tool for elections and political campaigns worldwide. Politicians in the United States are generally quite active on social media, and the most popular topics of online conversation can be seen by looking at hashtag usage. #Buildbackbetter, which was used a total of 9,513 times by Democratic members of U.S. Congress, was the most frequently used hashtag by members of congress in 2021, followed by #americanrescueplan, which was used 8,903 times.

European MPs are active on social media too, with Twitter being the platform upon which most posting happens. In 2021, Twitter accounted for 67 percent of monitored social media posts by European politicians, followed by Facebook with 28 percent, and Instagram with five percent. However, MPs who used Instagram were more likely to receive engagement. Compared to 1.2 percent engagement on Facebook and 0.4 percent on Twitter, MPs had an average engagement rate of 2.9 percent on Instagram.

Currently, major electoral campaigns that are playing out on social media are the upcoming general election in Brazil (October 2022), as well as the midterm elections in the United States (November 2022).

Additionally, the interest in discussing political events on social media is also reflected in the fact that some of the most popular AmA (Ask me Anything) posts on Reddit were about politicians and current events. Currently, then-U.S. president Barack Obama still holds the top spot of the most popular AmA with 216,000 upvotes. U.S. senator Bernie Sanders has also held several popular AmA sessions, as well as activists for major causes.

Who engages in social media activism?

Even though social media is often a stage for unwelcoming internet trolling, supportive messages directed at the players far outnumbered hateful ones. A report conducted during the run-up to and during the tournament found that for every negative post directed at the England women’s team, there were around 125 positive posts. England players Beth Mead received over eight thousand optimistic social media posts, and Ella Toone received over seven thousand positive messages.
This text provides general information. Statista assumes no liability for the information given being complete or correct. Due to varying update cycles, statistics can display more up-to-date data than referenced in the text.
Published by S. Dixon, Sep 16, 2022 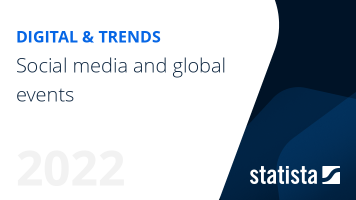 The most important key figures provide you with a compact summary of the topic of "Social media and global events" and take you straight to the corresponding statistics.