Call centers are offices set up by companies for inbound or outbound telephone calls. Inbound call centers generally deal with customer service and facilitating such things as customer enquiries or complaints. Activity in outbound call centers usually includes such occupations as telemarketing, market research, and the seeking of charitable donations. Offices handling other forms of customer contact, such as email, social media, and letters, as well as telephone calls are often called contact centers.

The United States has remained a global competitor in the call center industry market in terms of employment and expansion. A survey regarding the amount of call centers opened in 2021 found that some 100 of these new call centers were located in the United States, more than any other region. The primary industry of contact centers worldwide was financial services, closely followed by technology, media, and telecommunications. In 2021, the state with the highest employment in telemarketing was Texas, with approximately 22,500 employees. Florida ranked second with 15,000 workers in the telemarketing industry.

India-based Tata Consultancy Services (TCS) is one of the leading call center service providers in the world. During their fiscal year ending March 31, 2022, the company generated approximately 25 billion U.S. dollars in revenue. Another major player in the industry is the U.S.-headquartered Genpact. In early 2021, the company announced its acquisition of Enquero, and in that year the revenue of Genpact increased by around 400 million U.S. dollars compared to the previous fiscal year. Since 2006, the company revenue has increased annually, reaching around 4 billion U.S. dollars in 2021.
This text provides general information. Statista assumes no liability for the information given being complete or correct. Due to varying update cycles, statistics can display more up-to-date data than referenced in the text.
Published by Statista Research Department, Sep 21, 2022

Number of new call centers opened in the U.S.
102

Number of call centers opened or expanded by region 2016-2021

Number of contact center employees in the U.S.
2.79m

Industry revenue of “telephone apparatus manufacturing“ in the U.S. 2012-2024

Number of call centers opened or expanded by region 2016-2021 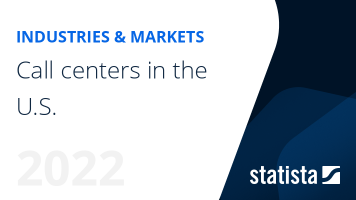 Go to report Call centers in the U.S.
Top Seller

The most important key figures provide you with a compact summary of the topic of "Call center services industry in the U.S." and take you straight to the corresponding statistics.