Published by
Tugba Sabanoglu,
Nov 17, 2022
Christmas is an annual festival commemorating the birth of Jesus Christ. Because of the uncertainty about the month and date of Jesus's birth, several hypotheses argue that the first celebration dates back to 336 A.D. Christmas Day on December 25 represents a public holiday in many of the world's countries since it is celebrated religiously by Christians, as well as by non-Christians, who stick to the festivity for cultural reasons. While the traditional celebration regards Christmas as the nativity of Jesus, more recently, several countries celebrate Christmas Eve on December 24 instead with gift-giving and by sharing a traditional meal with family and relatives.
In Europe, a special event taking place during the Christmas holiday season is the Christmas market: a street market celebrated during the four weeks of Advent, peculiar to each country. Christmas markets found their origins in Germany where, still to this day, some of the greatest are held. Christmas markets are a very popular event in several countries such as Germany, France, and Italy because of the combination of traditional food products, a Christmassy atmosphere, and entertainment for children.

Christmas is related to both tradition and a more recent trend associated with festive decorations and gift-giving. According to Statista's annual Global Consumer Survey Holiday Special, in Germany, social media was a key source of inspiration for Christmas decorations. Consumers both in Germany and the UK mostly made use of online shops, department stores and discount stores to purchase their festive decorations. When it comes to giving presents to their loved ones, the most popular category for UK consumers was consumers electronics in 2021. In Germany, per capita consumer spending on Christmas gifts was expected to exceed 500 euros.

Besides Christmas gift shopping, the last quarter of the year is a packed with many shopping events such as Singles' Day and Black Friday, and typically retail spending reaches to record levels during this time. In Europe, Christmas retail spending was the highest in the United Kingdom over the past years, and is expected to reach almost 85 billion British pounds, surpassing other major European economies like Germany and France.

In the following 4 chapters, you will quickly find the 23 most important statistics relating to "Christmas season in Europe". 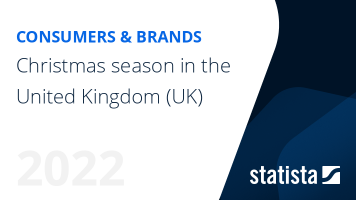 The most important key figures provide you with a compact summary of the topic of "Christmas season in Europe" and take you straight to the corresponding statistics.

Black Friday in the UK