Published by
D. Tighe,
Dec 14, 2021
In the United States, Christmas is celebrated on December 25. It is a civil holiday that is enjoyed by an increasing number of non-Christians and is an integral part of the holiday season. In 2021, 85 percent of people in the United States stated they were planning to celebrate the holiday, with only one in ten declaring that they would not be joining in with the festivities. Christmas is typically the largest economic stimulus for many nations around the world as sales increase dramatically in almost all retail areas. In 2021, total holiday retail sales were projected to have reached new highs of almost 850 billion U.S. dollars.

Is the popularity of online shopping here to stay?

In 2020, online sales during the holiday season increased by a much higher margin compared to previous years, which was largely due to the impact of COVID-19. This trend in the popularity of online shopping is set to continue in 2021, with U.S. retail e-commerce holiday sales predicted to grow to record numbers of over 200 billion U.S. dollars, although this isn’t quite as large of a year-on-year increase as in the previous year. Over half of consumers in the country stated they were likely to visit online retailers when buying gifts, making it the favorite option in 2021. Specifically, the favorite e-retailer to go to for those gifts was the usual suspect: Amazon.com. There were, however, 4% more people planning to do their holiday shopping in-store than in the previous year, although this still lagged behind pre-pandemic levels.

The Christmas shopping season can start as early as September and some consumers begin even earlier. In 2021, approximately 40 percent of Christmas shoppers in the United States stated they normally start before the end of October, while just about 10 percent of consumers usually begin in December. The average amount people in the United States believed they would spend in 2021 amounted to some 880 U.S. dollars, which is a little more than the previous year’s budget.

The Christmas tree is considered to be the main symbol of this pagan tradition. In 2021, most U.S. consumers were planning to put one up, whether it was a real or an artificial tree. In 2021, over half of people aged 30 to 49 years were planning to spend over 50 U.S. dollars on a tree.

The economic impact of Christmas is a factor that has grown steadily, not only throughout the United States, but also around the world. The merry season will continue to be a significant key sales period for businesses and retailers alike. Overall, the 2021 holiday season showed some recovery from the effects of coronavirus, mostly seen in a planned increase in consumers’ holiday budget, but also in the slight increase in in-store shoppers.

In the following 5 chapters, you will quickly find the 32 most important statistics relating to "U.S. Christmas season".

Statistics on the topic
Holiday retail sales in the U.S.
843.4bn USD
YoY growth of Christmas holiday retail sales
8.5%
Share of consumers planning to spend the same or more than last year in the holiday season
75%

The most important key figures provide you with a compact summary of the topic of "U.S. Christmas season" and take you straight to the corresponding statistics.

Christmas gift shopping in the U.S.

Halloween in the U.S. 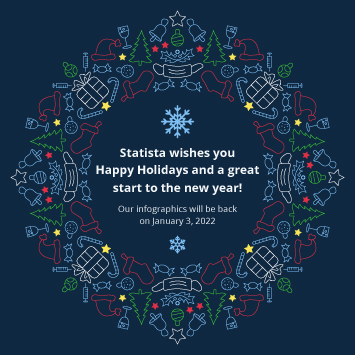 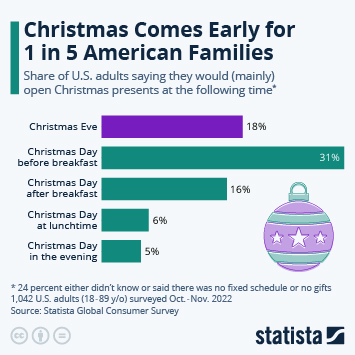