The expression “mobile operating system” (mobile OS) refers to operating systems that manage the software on mobile devices like phones, tablets, and smartwatches. By contrast, laptops or notebooks are not included in this category because the OS on these devices was originally designed for desktops and is, therefore, not considered mobile.

Over the past decade, Android and Apple iOS have been the undoubted leaders of the smartphone OS market, recording a combined share of around 99.5 percent in 2022. The remaining share is held by Windows Phone and Samsung, which, on the contrary, did not have success and their shares have fallen to a negligible level. However, Apple has recorded strong sales, and, indeed, since 2010 it has always been the leading mobile device vendor, holding a market share of roughly 52 percent in 2021. At the beginning of 2022, the iPhone 13 was the most popular smartphone in the United Kingdom and accounted for roughly 29 percent of sales, while the only Android phone that made it into the top five smartphones sold was the Samsung Galaxy A12.

Similarly to the smartphone OS market, Apple and Android lead the tablet OS market, with shares of 57.9 and 42 percent in 2022. respectively. Apple is by far the major tablet vendor in the United Kingdom, occupying over 60 percent in 2021. Samsung and Amazon follow, holding 18.6 and 9.5 percent of the market. Over the past few years, tablets have become a common household item in the UK, with an average of over 64 percent of people under 54 years old owning this device.
This text provides general information. Statista assumes no liability for the information given being complete or correct. Due to varying update cycles, statistics can display more up-to-date data than referenced in the text.

Petroc Taylor
Research expert covering global developments in the use of data
Get in touch with us now
Published by Petroc Taylor, Oct 27, 2022 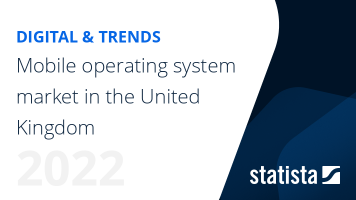 The most important key figures provide you with a compact summary of the topic of "Mobile operating systems in the United Kingdom (UK)" and take you straight to the corresponding statistics.