A mobile operating system (mobile OS) manages smartphones, tablets, and other devices that are used while on the move. Aside from the physical design of the handset itself, the mobile OS is responsible for the way users interact with a device. This user interface includes the look and feel, overall design, and functionality, with each of these elements crucial to ensuring a positive user experience.

Google’s Android system and Apple’s iOS are the most used smartphone operating systems worldwide, by a considerable margin. Much of Android’s success can be attributed to its commitment to openness. It was established as an open-source platform in 2007. Many smartphone vendors – such as global smartphone giant Samsung – take the opportunity to use the freely available software, resulting in Android possessing a far greater share of the global market. Apple’s iOS is a closed-source platform and runs exclusively on its iPhones and iPads. Its share of the smartphone operating systems market continues to remain stable worldwide without much growth. Still, strong relationships with existing customers have been formed through the brand – particularly in the United States – and loyalty to the iPhone proves valuable in terms of Apple’s revenue.

Mobile OS updates are released constantly, primarily deployed directly onto the device without connecting to a computer. OS updates provide upgrades in functionality, security, and overall stability and ensure a common standard to which developers can create apps. The vast majority of iPhone users have installed the latest version of iOS. Still, the schedule of Android updates varies by device, manufacturer, and mobile carrier, meaning many users are not running the most up-to-date version of Android. The latest software developments from both Google (Android 12) and Apple (iOS 15) were released in the fall of 2021.

Android and iOS have not always dominated the mobile OS market; Symbian and RIM were major competitors in 2009. Symbian software most notably ran on devices manufactured by Nokia, while RIM (Research In Motion) operated on the popular BlackBerry devices. However, both were slow to react to the increasing importance of software operating systems, allowing Android and iOS to capitalize. Their innovative technology has paved the way for the market we have today.
This text provides general information. Statista assumes no liability for the information given being complete or correct. Due to varying update cycles, statistics can display more up-to-date data than referenced in the text.
Published by Statista Research Department, Jun 13, 2022

Worldwide unit shipments of smart wristwear 2018 and 2022, by operating system 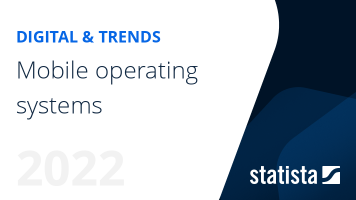 The most important key figures provide you with a compact summary of the topic of "Mobile Operating Systems" and take you straight to the corresponding statistics.