Published by
Julia Faria,
Sep 13, 2022
Political advertising spending in the United States is expected to amount to over 9.6 billion U.S. dollars in 2022. With the midterm elections underway to determine the balance of power in the Senate and the House of Representatives, political ad buys have already surpassed 3.5 billion U.S. dollars as of early August. The value nearly matches the total amount invested in political advertising in 2018, putting the current polls on pace to reach the largest ad spend on midterms so far. If the spending projections are realized, 2022 midterms spending will surpass the 2020 election cycle, when the Trump-Biden race reached an all-time high in advertising expenditure.

CTV ramps up as a channel to win voters

As audiences shift their media consumption to streaming platforms and internet-connected devices grow more and more popular, connected TV (CTV) emerges as a powerful channel for political advertisers to target and reach voters. In 2022, six out of 10 U.S. households owned at least one CTV device. With often non-skippable ads, connected TVs draw viewers of all ages and attract a young demographic difficult to reach with linear television. Additionally, voters can be targeted based on their geographic location and purchasing behavior. On top of that, a survey revealed that 65 percent of American CTV viewers considered targeted ads to improve their viewing experience, while a further 57 percent stated preferring CTV ads to traditional television advertising.

Unsurprisingly, candidates and political parties are seizing this opportunity. In 2020, CTVs accounted for nearly 20 percent of political programmatic ad spending in the United States. In comparison, around 7.2 percent of the total programmatic digital advertising spend was allocated to connected TV that year. The data indicates, therefore, that political advertisers are turning to CTV faster than the average. As of August 2022, political ad buys on CTV amounted to 310 million U.S. dollars, roughly 45 percent of the total digital ad expenditure for the current political campaigns.

In the following 5 chapters, you will quickly find the 29 most important statistics relating to "Political advertising in the United States".

The most important key figures provide you with a compact summary of the topic of "Political advertising in the United States" and take you straight to the corresponding statistics.

Media and politics in the U.S.

Social media and politics in the United States 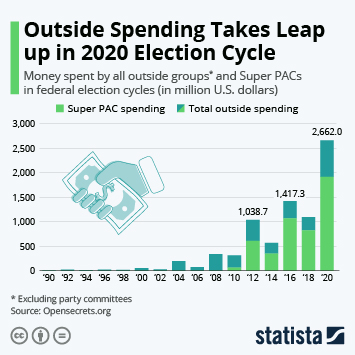 Outside Spending Takes a Leap up in 2020 Election Cycle 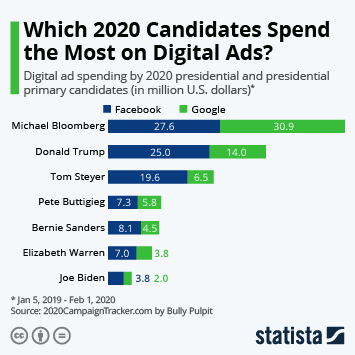