Mezcal is a traditional Mexican spirit made from agave, a type of plant which is mostly found in Mexico. The drink is produced in nine Mexican states and consumed all over the world. Together with tequila, mezcal reached a retail volume of more than 38.5 million 9-liter cases worldwide in 2020. Only considering luxury brands, tequila and mezcal are expected to reach a retail value of more than one billion British pounds by 2020.
In Mexico, mezcal is considered one of the most popular alcoholic beverages. As of 2017, the drink accounted for 1.9 percent of spirits consumption in Mexico. Among alcohol drinkers, 31.7 percent like to drink mezcal, with consumption of the agave-based beverage being slightly higher among men than it is among women. Apart from the differences in consumption related to gender, preference for the drink also varies depending on age, as people in their thirties and forties tend to consume more mezcal than those of other generations. Within this age range, almost 35 percent of alcohol consumers have had mezcal in the previous year.

To fulfil the growing local and international demand, Mexico’s mezcal production has increased from 1.45 million liters in 2014 to more than five million liters in 2018, with an average growth rate of almost 38 percent per year. The most produced category is 'Mezcal Artesanal', making up 92 percent of the drink’s production volume. Artisanal mezcal is produced through different traditional methods and its manufacture processes depend on its region of origin.

With mezcal also reaching higher demands abroad, Mexico exported 3.42 million liters of the spirit in 2018, up from 2.8 million liters the year before. As the beverage becomes more and more popular, the number of for-export mezcal brands has increased, currently totaling 240 brands. Of the trading partners importing mezcal from Mexico, the United States is the most important, with nearly two thirds of exports destined for Mexico's northern neighbor. The value of this increasingly popular beverage seems to be rapidly raising, as dollar sales of mezcal in the United States had a yearly growth equivalent to more than 34 percent in 2018, more than that of any (other) kind of tequila.
This text provides general information. Statista assumes no liability for the information given being complete or correct. Due to varying update cycles, statistics can display more up-to-date data than referenced in the text.

Eloise Trenda
Research Expert covering global food topics with a focus on the French, Spanish, and LATAM markets
Get in touch with us now
Published by Eloise Trenda, May 31, 2022

Annual per capita expenditure share of spirits in Mexico 2010-2020 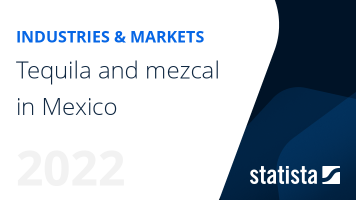 Go to report Tequila and mezcal in Mexico
Top Seller

The most important key figures provide you with a compact summary of the topic of "Tequila and Mezcal in Mexico" and take you straight to the corresponding statistics.