One of the leading countries in the world in terms of worldwide international tourist arrivals, Italy attracts millions of tourists every year thanks to its fascinating culture, natural landscapes, artistic sites, and renowned cuisine. When looking at the most popular destinations, Rome, Venice, Milan, and Florence were among the most visited municipalities in Italy based on the number of overnight stays in 2020. That year, Rome had roughly double the volume of overnight stays compared to other popular destinations. Overall, while the number of international tourist arrivals in Italy peaked at over 96 million in 2019, the coronavirus (COVID-19) pandemic drastically changed this scenario, with inbound tourist arrivals in the Mediterranean country totaling around 41 million in 2021.

The Italian capital has long been one of the most popular destinations for tourists in Italy. The city is especially popular among American tourists, who made up the highest number of inbound arrivals in Rome in 2021. However, during the health crisis, arrivals from the United States were significantly lower than in 2019. The city is not only popular with international tourists, as domestic arrivals in Rome totaled over two millions in 2021, rising over the previous year but not catching up yet with pre-pandemic levels.

As the number of tourists in Rome decreased sharply due to the impact of COVID-19, also Venice and Milan were hit heavily by the travel restrictions. When considering international tourism in Venice, La Serenissima, as the city is nicknamed, suffered a drop in international tourist arrivals of nearly 71 percent in 2021 compared to 2019. Similarly, the number of international arrivals in Milan’s tourist accommodation stood at around 1.3 million that year, only accounting for 27 percent of the figure recorded in 2019.

Looking at hotel establishments in Italy, although Rome is one of the most attractive destinations in the country for international and domestic travelers, it was not the most expensive Italian city to book an overnight stay in a four-star hotel in 2021. Venice held this record, with an average price per night of nearly 200 euros, followed by Florence and Milan. That said, Rome had by far the highest number of chain hotels in Italy that year. In terms of non-hotel accommodation, there were roughly 32 thousand non-hotel establishments in Venice, down from a peak of nearly 41 thousand in 2018. Meanwhile, rented holiday dwellings and farmhouses were the most common non-hotel accommodation in Florence in 2021.
This text provides general information. Statista assumes no liability for the information given being complete or correct. Due to varying update cycles, statistics can display more up-to-date data than referenced in the text.
Published by Statista Research Department, Aug 30, 2022

Number of international arrivals in tourist accommodation in Rome, Italy 2014-2021 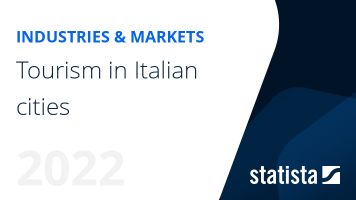 The most important key figures provide you with a compact summary of the topic of "Tourism in Italian cities" and take you straight to the corresponding statistics.