ASOS, short for ‘As Seen On Screen’, is one of the most successful online fashion stores globally. It stands among the leading online stores in the clothing and shoe segments in the United Kingdom (UK), where the retailer is headquartered. The company has also recently expanded. Due to financial hurdles, the British fashion company Arcadia group collapsed in early 2021, and ASOS acquired the high street group’s brands Topshop, Miss Selfridge, Topman, and HIIT.

A global player based in the UK

Despite a smaller UK customer base compared to other more populated markets, ASOS generates more retail sales in its home country than in all the European Union (EU). In the financial year 2021, the e-commerce company reported retail sales worth 1.6 billion British pounds in the UK, while EU countries accounted for less than 1.2 billion British pounds. Since 2014, sales have more than quadrupled in the United States, projecting ASOS beyond European fashion borders. Being both an e-retailer and a marketplace, ASOS is supplied by manufacturing factories located all around the world, which – as is the case for other fast fashion companies – are mostly located in China, India, and Turkey.

ASOS’s increasing revenues and acknowledged commitment to ethical matters might have contributed to its higher brand value, earning the title of second-fastest-growing brand worldwide in 2021.

Although with seasonal fluctuations, monthly visits to the ASOS website have steadily increased over the last few years. Most of the online audience is based in the UK, where asos.com had the second-biggest share of voice by the end of 2021. This means that ASOS’s search visibility overshadows other major fashion brands like Marks and Spencer, or even Amazon. Online popularity mirrors the increasing general perception of the brand in the UK. In 2021, almost 90 percent of British people had heard of ASOS, while almost 40 percent expressed a certain appreciation for the brand.

Outside of the EU, Russian users are the third-largest desktop audience on asos.com, outdoing online traffic from France in 2021. Likewise, in the same period, the Russian social network VKontakte was the fourth main source of social traffic to the e-commerce site, after other established platforms like Facebook, YouTube, and Pinterest.
This text provides general information. Statista assumes no liability for the information given being complete or correct. Due to varying update cycles, statistics can display more up-to-date data than referenced in the text. 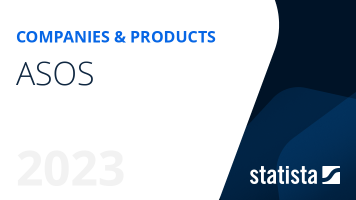 The most important key figures provide you with a compact summary of the topic of "ASOS" and take you straight to the corresponding statistics.

ASOS in the UK