Since its launch onto the Berlin startup scene in 2008, fashion and lifestyle retail company Zalando has become one of the most successful online retailers in Europe, especially in the fashion segment. Its customer base is growing at a reassuring rate, with active customers reaching 44.5 million in the second quarter of 2021. Germany and the larger DACH region are Zalando’s main markets, but the company is also active in other European countries such as Poland, Italy, France, Spain, the Netherlands, and the UK with increasing popularity.
For the first time in 2018, the company’s revenues from the rest of Europe surpassed that of the DACH region, which combines Germany, Austria, and Switzerland. As of 2020, Zalando generated a total of nearly 7.9 billion euros in revenue, 3.7 billion of which came from DACH and 4.2 billion euros came from other European markets. In Germany, Zalando is no longer an online-only retailer and has discovered the power of establishing connections with physical retailing. After successfully launching its first physical store in Berlin in 2018, Zalando now operates outlet stores in ten other city locations across Germany.

Zalando’s journey over the course of the decade was sometimes a bumpy one. In 2020, the company’s net income fluctuated along the way from quarter to quarter. From January to March of 2020, when the coronavirus (COVID-19) crisis hit the world, Zalando delivered the highest losses ever since records have been kept. But the turnaround was quick to come, and the company’s net income for the following quarter was at an outstanding 122.5 million euros.

The impact of COVID-19 on Zalando is visible in its website visit numbers too. In the first quarter of 2020, online traffic to Zalando took a hit compared to the preceding quarter. Nevertheless, website visits increased again over the following months and peaked at 1.7 billion in the first quarter of 2021, mostly fueled by traffic from mobile devices.

There has been a reckoning in fashion retail regarding sustainable, fair, and traceable practices in the industry. Leading fashion retailers such as H&M, Asos, the Inditex Group (Zara), and many more have pledged to sourcing sustainable products, decreasing their carbon footprint by adopting greener and fairer policies throughout their supply chain operations. Zalando is one of the European retailers that took action to become more accountable in the fashion industry.

According to data from the company’s corporate responsibility reports, since 2017, Zalando decreased its Scope 2 greenhouse gas (GHG) emissions, but overall release of GHG increased. Regarding greenhouse emissions per order, there was a significant reduction in GHG emissions per order between 2017 and 2019 though. Similarly, Zalando improved its Fashion Transparency Index score since 2017. In 2020, the company ranked 45 percent out of 100. This meant that Zalando was deemed successful in disclosing their environmental and sustainability goals, as well as manufacturer relations.
This text provides general information. Statista assumes no liability for the information given being complete or correct. Due to varying update cycles, statistics can display more up-to-date data than referenced in the text.

Marina Pasquali
Research expert specializing in economy and politics
Get in touch with us now
Published by Marina Pasquali, Nov 17, 2022

Zalando: website traffic on desktop and mobile across all domains 2022 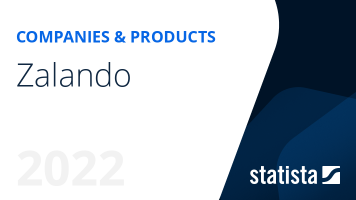 The most important key figures provide you with a compact summary of the topic of "Zalando" and take you straight to the corresponding statistics.