In the Nordic countries, alcoholic beverages are only allowed to be sold in government-owned store chains. Denmark, although part of these countries, does not have comparable alcohol laws and the sale of alcoholic drinks is allowed in regular supermarkets and retailers.
Retail In recent years, the general average sales volume of pure alcohol consumed per person decreased in Denmark. As of 2020, the sales volume amounted to 7.8 liters per person. This overall declining trend was visible especially in beer and wine sales. By comparison, spirit sales volumes overall increased in the past years. The sales volume of beer fell from around 17.6 million liters in 2010 to approximately 16.3 million liters in 2020, while spirits sales grew from almost 6.6 million liters to roughly 7.7 million liters in the same period.

Consumer spending The average household consumption expenditure on lager beer in Denmark was very high compared to spending on low and non-alcoholic beer. In 2020, consumers spent just over 900 Danish kroner on lager beer, while, on average, 33 Danish kroner were spent on low alcohol content and non-alcoholic beer. Additionally, Danish households spent 870 Danish kroner on spirits and liqueurs.
This text provides general information. Statista assumes no liability for the information given being complete or correct. Due to varying update cycles, statistics can display more up-to-date data than referenced in the text.
Published by M. Ridder, Mar 10, 2022

Number of enterprises in the manufacture of beer in Denmark
100

Denmark: number of enterprises in the manufacture of beer industry 2010-2019

Sales volume of pure alcohol per person in Denmark 2010-2021 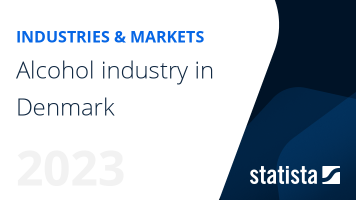 The most important key figures provide you with a compact summary of the topic of "Alcohol industry in Denmark" and take you straight to the corresponding statistics.