Published by
Yihan Ma,
Sep 19, 2022
Baijiu literately means “white liquor” in Mandarin. It is a traditional distilled alcoholic beverage originating in China, which typically contains an alcohol content between 35 and 60 percent. The most common ingredient for producing baijiu is fermented sorghum. However, other grains like rice and wheat may be used as well. Baijiu is often considered China’s national drink, which is enjoyed on various occasions, from family gatherings to business banquets.

The baijiu industry in China

While the revenue of the baijiu industry remained at the same level, its annual production volume saw a plunge since 2016. This phenomenon resulted from not only the climbing demand for lower alcohol content beverages but also the acceleration in industry concentration. The number of baijiu manufacturers in China dropped to less than one thousand by the end of 2021, an almost 40 percent decrease compared to 2017. Among all baijiu enterprises in China, the 19 publicly listed companies contributed to nearly half of the industries total revenue and over 80 percent of the profits.

Kweichow Moutai, Wuliangye, and Jiannanchun were three leading baijiu brands among Chinese consumers in terms of recognition. Quality is essential when it comes to baijiu consumption. In recent years, the share of Chinese baijiu consumers who choose higher-end brands increased significantly. The luxury baijiu brands such as Kweichow Moutai are not only popular for drinking but are also favored amongst baijiu collectors. A bottle of limited edition Moutai could be easily traded for double the price, while some vintaged Moutai have been sold for over 10 million yuan in auctions.

Though e-commerce possesses a high penetration rate in China, seven out of ten wealthier consumers prefer to purchase baijiu offline, where the quality is more secure. The most popular spots to buy baijiu offline are brand franchises and department stores.

In the following 5 chapters, you will quickly find the 28 most important statistics relating to "Baijiu industry in China". 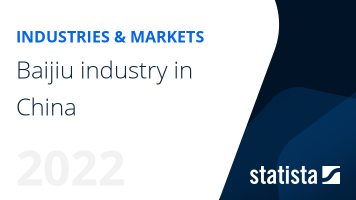 The most important key figures provide you with a compact summary of the topic of "Baijiu industry in China" and take you straight to the corresponding statistics.