In the constantly evolving digital landscape, mobile internet has acquired strategic importance: not only it influences consumers’ behavior online, but it also defines a region’s competitiveness in the global market. In recent years, the share of people in Europe who have been accessing the internet via mobile devices has experienced a constant increase, going from 60.53 percent of the total population in 2018 to more than 74 percent in 2021. As of 2021, the United Kingdom, Denmark, and Norway ranked as the countries with the highest mobile internet penetration rate in Europe, with approximately 90 percent of their population using mobile devices to navigate the internet.
Mobile internet usage in the region has been favored by the implementation of consumer-friendly policies like the elimination of extra roaming charges across the EU, as well as considerable investments to improve mobile connectivity networks. While 4G mobile connections are still expected to account for approximately 51 percent of mobile connections in Europe in 2025, the costs for 5G enhanced mobile broadband (eMBB) deployments in the region surpassed 44 billion euros in 2021. According to an analysis conducted in 2021, the market size for sixth-generation wireless connections (6G) in Europe will be 216 million U.S. dollars by the end of 2028.

The possibility to access communication and social interactions on the go is one of the key features of having access to mobile internet. Engagement levels on mobile social apps in Europe experienced a sudden increase between 2019 and 2020, as a secondary consequence of the global outbreak of the COVID-19 pandemic. Despite the slowly normalizing global conditions, European users were still spending over one hour daily on social media applications in 2021.

Social and communication app categories appear to be among the most used mobile internet services in many of the region’s markets, presenting high engagement rates in several European countries. In 2021, approximately 96 percent of users from the Benelux region reported accessing social media from their mobile devices. While browsing social media and keeping in contact with friends and family was one of the most popular activities for users in the region, mobile shopping was also an increasingly common activity for many European consumers. Almost eight in 10 German women and seven in 10 men reported buying products on their smartphones, respectively. Additionally, e-commerce apps were the most popular category for users in Romania in 2021.
This text provides general information. Statista assumes no liability for the information given being complete or correct. Due to varying update cycles, statistics can display more up-to-date data than referenced in the text.
Published by L. Ceci, Nov 10, 2022

Apps and mobile activities in Europe 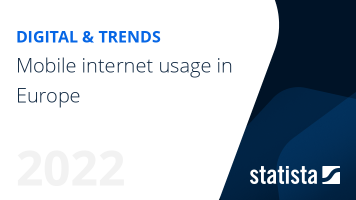 The most important key figures provide you with a compact summary of the topic of "Mobile internet usage in Europe" and take you straight to the corresponding statistics.