Published by L. Ceci, Oct 18, 2022
The mobile revolution has visibly reshaped the digital ecosystem and telecommunications landscape in Canada. In recent years, mobile devices have become essential tools for connecting people across provinces and territories in the world’s second-largest country. As web-enabled smartphones and tablets have also become a portable gateway to the rest of the world, mobile usage is rapidly increasing throughout Canada, with more mobile devices finding their way into consumers’ hands than ever before: As of 2022, the number of mobile internet users in Canada stood at 35.9 million, and by 2027, Canada’s mobile population is projected to surpass 39 million users. While laptop and desktop computers are still the most used devices to navigate the internet, web traffic from mobile phones has experienced a substantial increase in recent years.

Cutting the cord: connectivity and mobile usage trends in Canada

As of June 2021, Canada counted 27.79 million mobile broadband subscriptions. By 2025, Canada is expected to report a 45 percent adoption rate of 5G mobile connections which are projected to account for 51 percent of all mobile connections in the country.

The number of mobile subscribers in Canada has steadily increased over the last few years. In 2021, almost 34.5 million Canadians were subscribed to wireless services from leading mobile service providers such as Bell Mobility, Rogers Wireless, or TELUS Mobility, marking a record year in subscriptions for most Canadian mobile telecommunications companies and a further step away from landline telephone usage. Canadians are also going wireless to browse the web: mobile internet user penetration in Canada currently stands at an all-time high of 93.6 percent, and this gradual switch from desktop to mobile is increasingly showing in Canada’s distribution of online traffic.

What are the most popular mobile activities in Canada?

According to a survey of mobile users in Canada, as of June 2021, over 45 percent of respondents reported they could not live without their mobile phones. But what are the main activities and functionalities that make mobile phones such an important part of Canadians’ daily life? In line with North American and global digital trends, social media, emails, and instant messaging were the leading mobile internet activities in Canada. Canada’s social media usage has seen particularly strong growth in recent years, as the ever-increasing selection of available apps and platforms continues to excite and engage online users of many ages.

In 2021, users in Canada spent 4.22 hours per day engaging with mobile apps, up by over 20 percent compared to the previous year and by 35 percent compared to 2019. According to a recent Canadian consumer survey, internet browser apps and e-mail services were the most commonly used app categories in Canada. Social media and gaming were also among the most used app categories in the country, recording a penetration rate of 61 percent and 50 percent among smartphone users, respectively, as of May 2022.

In February 2022, several mobile games were among the most downloaded apps from users in Canada, with word games experiencing a rise in popularity. While W Challenge was among the most downloaded apps for Android users in Canada, mobile iOS users downloaded Wordle! -a word game published by San Francisco-based Lion Studio Plus- over one million times from the Apple App Store, with the app surpassing social video platform TikTok and ranking as the most popular app on the platforms for iOS iPhone users.

As of 2022, Facebook continues to be the leading social media website in Canada. On mobile, TikTok was the most downloaded social media app for Android users in the country, while iPhone users amassed 202 thousand downloads of messaging app WhatsApp, as well as 199 thousand downloads of the mobile Facebook app. Despite Meta-branded apps dominating the rankings, in 2021, user engagement with TikTok has experienced a 32 percent increase compared to the previous year, with mobile users in Canada spending an average of 22.6 hours per month on the social video app. While only 6.3 percent of internet users in the country reported TikTok being their favorite social platform at the end of 2021, Canada was among the leading markets for the ByteDance-owned mobile app, with iOS users in the country generating more than 355 thousand U.S. dollars in revenues on TikTok in January 2022.

In the following 6 chapters, you will quickly find the 53 most important statistics relating to "Mobile internet usage in Canada". 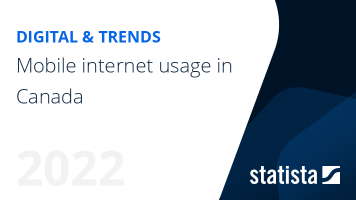 The most important key figures provide you with a compact summary of the topic of "Mobile internet usage in Canada" and take you straight to the corresponding statistics.