In 2019, roughly 70 percent of the Finnish population aged 18 to 64 participated in social networks. According to Statista’s Digital Market Outlook forecast, the number of social network users in the country is projected to exceed 3.7 million users in 2021 and increase annually thereafter, the penetration rate remaining around 60 percent. According to a 2020 report regarding the digital landscape in Europe, active social media penetration in Finland was estimated at 60 percent, referring to those who actively log into social media services on a monthly basis. In 2020, daily social media usage grew by over 16 percent, in particular in the age group of 16 to 24 year-olds who increased the time spent on social media more than any other age group.
The most popular social media platforms among Finns were Facebook, YouTube, Instagram and Snapchat. Out of messenger applications, WhatsApp ranked highest, leaving behind both YouTube and Instagram in terms of daily usage. Among the younger population, the top three most popular social media networks in 2019 were WhatsApp, YouTube, and Instagram. Furthermore, a study on digital media usage in Finland in 2019 revealed that the share of individuals using social media for more than two hours per day was several times higher among 15 to 24-year-olds (20 percent) compared to other age groups. In all age groups, WhatsApp, Facebook, and YouTube were the most frequently used platforms, with 47 percent of individuals using WhatsApp messaging services several times a day. However, 37 percent of Finns estimated in a 2020 survey that their Facebook usage has decreased over the past year.

As wearables and mobile devices take over from traditional electronic devices, it comes as no surprise that social networks are accessed increasingly via mobile phone. According to the Apple mobile application data, instant messenger apps, together with Facebook, dominated the most downloaded charts. Moreover, a recent Nordic survey found that video and photo platforms Instagram and Snapchat were both used with a smartphone by over 90 percent of respondents. For YouTube, both desktop and smartphone use were equally popular.

During the coronavirus (COVID-19) outbreak in 2020, media consumption generally increased in Finland. Based survey results from March 2020, almost one third of Finns estimated that their social media usage grew due to the pandemic. Daily usage of WhatsApp and Instagram increased the most after the implementation of COVID-19 restriction measures. While most social media platforms increased their popularity, daily usage of Facebook, internet forums, blogs, and LinkedIn decreased during spring 2020.
This text provides general information. Statista assumes no liability for the information given being complete or correct. Due to varying update cycles, statistics can display more up-to-date data than referenced in the text.
Published by J. Clausnitzer, Jul 26, 2021

Share of TikTok users in Finland 2021, by usage frequency 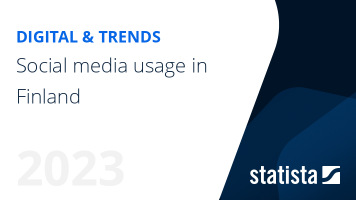 The most important key figures provide you with a compact summary of the topic of "Social media usage in Finland" and take you straight to the corresponding statistics.