Five years after its release in China under the name Douyin, the Byte Dance-owned app TikTok took the world by the end of the last decade, reaching the milestone of three billion downloads worldwide in July 2021. With an estimated 136.1 million TikTok users in Latin America in 2022 and a projected increase to 173.3 million by 2027, the region is one of the most prolific places for the platform’s expansion worldwide.

In 2022, Brazil and Mexico were among TikTok’s biggest markets, with 73.58 million and 50.52 million users each, and 124.1 million combined. Around 30 percent of the internet users in Mexico and Brazil used the app, a number expected to increase to 40 percent by 2025.

As of the third quarter of 2021, the number of monthly active TikTok users in Latin America increased by 91.2 percent year-over-year. Latin America ranked third in terms of year-over-year growth of TikTok MAU, placing behind the Asia Pacific and Middle East & North Africa, whose TikTok audience growth was in the triple digits.

After an initial boom in 2020, TikTok downloads have slowed worldwide during 2021. This is also true regarding the app’s performance in Latin America, although the platform’s app revenue is still growing in South American markets like Peru or Argentina.

Still a long way to the top

Approximately 70 percent of internet users in Mexico, Colombia, and Brazil are TikTok users. The app also ranks among the favorite social media in Latin American countries, although only 10.3 percent of users in Mexico claim it to be their favorite social platform. The same applies to TikTok’s position in the Latin American influencer market, only being the fourth favorite platform for such advertisement among Brazilian content creators, where it now competes directly against Instagram, Facebook, and YouTube.

Who are the Latin American TikTokers?

The success of Latin web personalities proves the TikTok’s popularity in Latin America, and Mexican influencers have more TikTok followers than any other country in the region. Youtuber Kimberly Loaiza has more than 41 million followers, thus placing her among the most followed personalities on the platform worldwide. Colombian content creator Carlos Feria gathers around 25 million followers, while Ignacia Antonia leads in Chile with around 21 million folllowers.

In 2022, TikTok registered the highest volume of content removal to date, with 102.3 million videos removed worldwide. Brazil ranked in fifth place among top countries with the most content removed from the video platform, with 4.78 million TikTok videos deleted during the first quarter of 2022. Mexico ranked eighth, accounting for up to 2.77 million clips removed. Content removal requests from governmental agencies in both countries also reached their highest numbers so far, although not in a significant volume as other countries.
This text provides general information. Statista assumes no liability for the information given being complete or correct. Due to varying update cycles, statistics can display more up-to-date data than referenced in the text.

Tiago Bianchi
Research expert covering internet & gaming in Latin America and Spain
Get in touch with us now
Published by Tiago Bianchi, Jul 15, 2022

Latin American country with the most TikTok users
Brazil

Number of TikTok videos removed in Brazil per quarter
4.78m

Brazil: number of TikTok videos removed as of Q1 2022

Leading TikTok influencers in Brazil 2022, by number of followers 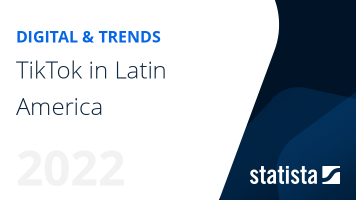 The most important key figures provide you with a compact summary of the topic of "TikTok in Latin America" and take you straight to the corresponding statistics.