Online extremism is a problem that affects society as a whole, as an extremist ideology promoted on fringe online forums has potential real-world implications. Some extreme online platforms encourage and validate the thoughts and feelings of like-minded online users that publish racist, sexist, and anti-Semitic beliefs, as well as support physical abuse, and terrorist behavior.
The worldwide digital population stands at over five billion as of 2022, and the majority of these internet users are also social media users, meaning that online extremism has the opportunity to reach many people. Users who lean to the right of the political spectrum tend to use social media more than center or left-leaning users, with platforms Twitter and LinkedIn having the largest share of right-wing users.

How much extremist content is on mainstream social media?

Despite a platform ban on organized hate groups, social media giant Facebook is still home to some white supremacist groups. As of June 2022, almost one third of these Facebook groups redirect users to anti-hate resources, meaning that the remaining 68 percent of these groups do not redirect to anti-hate resources, leaving Facebook users open to easily accessible white-supremacist ideology on the platform. Moreover, half of all white supremacist groups that were listed by Facebook as hate groups had a presence on the social media platform.

QAnon, a far-right, decentralized political movement founded on 4chan in 2017, has found a user base on mainstream platforms that has grown significantly in recent years. Whilst the conspiracy theory-based group found most of its social media posts being published on Twitter in 2020, growth on Facebook and Instagram increased dramatically between 2017 and 2020.

Facebook states community guidelines are used to protect users from potential online harms. The company posts regular transparency reports regarding content removal, allowing readers to estimate the scale of problematic content on the platform, and what Meta does to combat it. In the first quarter of 2022, a record number of terrorist propaganda was removed from Facebook, at over 16 million pieces of such content being taken down in one quarter. Furthermore, over 13 million pieces of hate speech content were removed. During this same time period, child safety concerns were the leading content violation on VoIP and messaging service Discord, resulting in the removal of almost 25 thousand servers. Over ten percent of community violations submitted by Discord users in the second half of 2021 were of a violent extremist nature.

There are a few prominent social networking sites that have become popular with the alt-right, far-right, and internet users who have extremist or fringe ideologies, and now fall under the term ‘alt-tech’. Gab, founded in 2016, is an alt-tech social networking service that follows Twitter’s micro-blogging concept. As of May 2022, only three percent of Americans had an account on the platform.

Former U.S. President Donald Trump founded Truth Social in 2021 which falls into the alt-tech category due to its uncensored approach to online conversations. With comparable popularity to Gab, three percent of U.S. adults have an account on Truth Social, and most of the platform’s users identify as Republican.

Additionally, on Gab, Truth Social, and the self-proclaimed free-speech platform Parler, fire weapons, abortion, and the January 6th attack on the Capitol were all common topics of conversation in the summer of 2022.

The threat of the incel community

The incel community – incel coming from the phrase ‘involuntary celibate’ – is another online fringe group demonstrating mostly misogynistic views. The most used incel website draws on average 2.4 million visitors per month. Additionally, there are specific sites that are used as pathways to this incel forum, namely body image sites, suicide forums, and unemployment forums, aimed primarily at male audiences. These sites work as an online ecosystem supporting the incel community and guiding users to the primary incel forum. The incel forum in question frequently publishes misogynistic, racist, and homophobic content, as well as supporting physical violence against women and children.

Despite the fact that this niche forum attracts a relatively low number of visitors, the website's content is easily accessible. Within a six-month period, YouTube was linked to this specific incel website more than 14 thousand times. Other mainstream platforms such as Reddit, Twitter, TikTok, and Instagram were also found to have numerous links on the platform during this time.

Growth in online anti-vaccination sentiment has been on the increase over the past few years, particularly since the COVID-19 pandemic and subsequent vaccines. Social media has been utilized by those with anti-vaccine stances to promote this kind of online content. Between July and August 2020, anti-vaccination Instagram accounts saw an increase of over 620 thousand followers. Online users in the United States are also likely to learn about COVID-19 vaccinations through social media.
This text provides general information. Statista assumes no liability for the information given being complete or correct. Due to varying update cycles, statistics can display more up-to-date data than referenced in the text.
Published by Statista Research Department, Dec 2, 2022

Most popular social network among politically right leaning in the U.S.
LinkedIn

Countries producing the most QAnon tweets 2017-2020 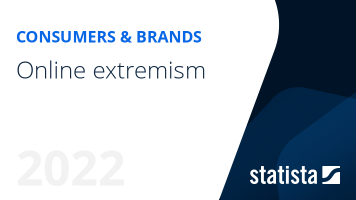 The most important key figures provide you with a compact summary of the topic of "Online extremism" and take you straight to the corresponding statistics.