Vegetables are one of the cornerstones of human nutrition, vital for a healthy and balanced diet. In 2021, the global fruit and vegetables processing market was valued at approximately 304 billion U.S. dollars. In 2020, Asia produced almost 80 percent of the vegetables produced globally, totaling about 898 million tons. The most produced vegetables worldwide are tomatoes, onions, and cucumbers.

Vegetable industry in the U.S.

In the United States, the area used for vegetable production has been decreasing since 2000. As of 2021, some 2.3 million acres are used in total for growing vegetables. The production value for fresh market vegetables in the U.S., however, has fluctuated over this time period came and was valued at over 14 billion U.S. dollars in 2019. In 2022, the total projected farm income based on cash receipts from vegetables was about 17.6 billion U.S. dollars. California is the most important U.S. state when it comes to the production of vegetables.

Every average American utilizes about 140 pounds of fresh vegetables and 113 pounds of processed vegetables per year. Tomatoes and onions are the most popular fresh vegetables, followed by and some varieties of lettuce and bell peppers. The expenditure on fresh vegetable in the U.S. households captured a share of 32 percent of the total fruits and vegetables expenditures. Every U.S. consumer annually spends approximately 48 U.S. dollars on frozen vegetables This text provides general information. Statista assumes no liability for the information given being complete or correct. Due to varying update cycles, statistics can display more up-to-date data than referenced in the text.

Most consumed vegetables in the U.S. 2021, by type 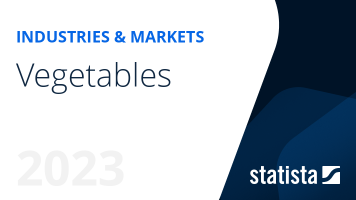 The most important key figures provide you with a compact summary of the topic of "Vegetables" and take you straight to the corresponding statistics.