Launched in the United States in 2009, Kickstarter is a global crowdfunding platform which helps creative projects to raise funding from backers. Project creators choose a deadline and a minimum funding goal. Projects must reach their funding goal, otherwise no money will be collected. People who back Kickstarter projects are offered tangible rewards such as custom editions and early releases of the projects as well as special experiences in exchange for their pledges. The platform is currently only open for project creators from a small selection of countries but project backing is available internationally.
Evergrowing amount of pledges
Every year, more and more funds are being raised on Kickstarter: Between 2017 and 2022, the total amount of funding pledged to Kickstarter projects more than doubled. Some of the most successfully completed Kickstarter projects raised several million dollars from project backers. E-paper watch Pebble managed to raise more than 20 million U.S. dollars, while the high-tech cooler "Coolest Cooler" raised more than 13 million U.S. dollars during their funding campaign, providing the projects not only with financial but also public support and attention.

Most popular categories
The most popular Kickstarter project category was music, with more than 33,500 fully funded projects as of July 2022. Other successful high-volume categories include film & video, games, art, publishing, and design. The category with the highest success rate, however, was Comics, with a success rate of around 62 percent. As of July 2022, more than 21 million people have pledged their monetary support towards Kickstarter projects. This includes a total of 7.21 million people had backed more than one project on the crowdfunding site, making them so-called repeat backers.
This text provides general information. Statista assumes no liability for the information given being complete or correct. Due to varying update cycles, statistics can display more up-to-date data than referenced in the text.
Published by Statista Research Department, Jan 26, 2023 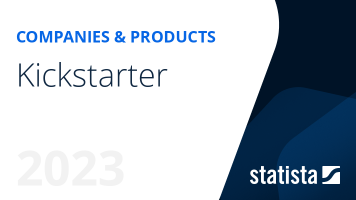 The most important key figures provide you with a compact summary of the topic of "Kickstarter" and take you straight to the corresponding statistics.