Published by
José Gabriel Navarro,
Jan 6, 2023
The United States is, by far, the largest advertising market in the world. In 2021, more than 285 billion U.S. dollars was spent on advertising in the United States. This figure is close to triple the amount spent on advertising in China, the second largest ad market in the world. Up until 2020, forecasts were showing healthy projections for the ad market in the U.S. , as media advertising spending was expected to surpass 260 billion U.S. dollars that year. However, the coronavirus disrupted the steady flow of investments, and 2020 estimates did not look good for traditional media spending - digital was to be the only medium to survive spending cuts that year. In 2021, however, the ad market in the U.S. significantly recovered, with sources comparing the figures to pre-covid era in 2019 expecting total ad revenue growth at 124 percent, and social media growth surpassing 160 percent.

Popular ad media in the U.S.

So far TV was the most popular medium chosen by advertisers in the United States, given its widespread reach and long standing reputation for accountability. In 2021, TV advertising spending in the U.S. reached 67 billion U.S. dollars. Television ad spending, however, is projected to lose its top position in the industry soon. Digital advertising spending has seen an unprecedented growth in the last few years, and is expected to become the biggest ad medium in the country. Digital advertising spending is forecast to surpass 270 billion U.S. dollars by 2024, with the pandemic only slightly slowing it down. What is more, mobile advertising spending is set to drive digital growth; in 2019 ad expenditures on mobile were leveled video and social but the gap between the three increased in 2021.

Parallel to television and digital advertising, more traditional media, such as radio and print, have seen their ad market share decrease in the past few years, as advertisers turn to digital formats. The year 2020 has not been merciful to radio either. Industry estimates saw radio advertising spending drop to 10 billion U.S. dollars that year and only slightly recover in 2021 and 2022 to continue on a downward trajectory since then. Print advertising spending is travelling on a similar road, with the exception that no recovery in 2021 is being projected for the medium. Lastly, OOH advertising, which has suffered greatly due to the pandemic as well, is believed to improve in the coming years, largely driven by digital's growth.

In the following 7 chapters, you will quickly find the 47 most important statistics relating to "Advertising in the United States". 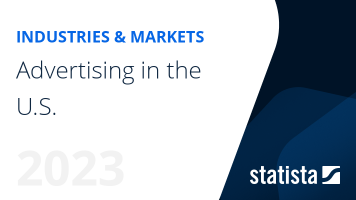 Go to report Advertising in the United States
Top Seller

The most important key figures provide you with a compact summary of the topic of "Advertising in the United States" and take you straight to the corresponding statistics. 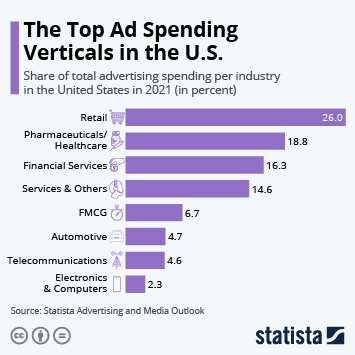 The Top Ad Spending Verticals in the U.S. 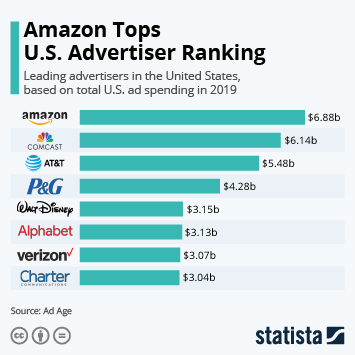