Published by M. Ridder, Jan 12, 2022
Coffee is among the most popular beverages in Canada and the world. Relished for its rich flavor and aroma, coffee can also act as a mild stimulant due to its caffeine content. While coffee is commonly served hot, a plethora of coffee varieties and specialties now exist, including iced and ready-to-drink coffee.

The Canadian hot coffee market was worth over 18 billion U.S. dollars in 2020. The single-cup pod market is making up an increasingly larger portion of the market. Having already accounted for more than a quarter of the market in 2016, its share has grown to 31 percent.

The two most commonly produced and consumed coffee strains are Arabica and Robusta. Cultivated throughout Africa, Central and South America and South East Asia, coffee is one of the world’s largest export commodities. Over the past few years, Canada has imported over 600 million U.S. dollars' worth of coffee, largely from producers in Columbia and Brazil. When it comes to Canadian coffee exports, the United States was, by far, the leading recipient.

In 2020, 71 percent of consumers reported consuming coffee in the past day, with Tim Hortons being the leading coffee brand for home use. When buying coffee for home use, Costco was the most popular retailer.

In the following 4 chapters, you will quickly find the 24 most important statistics relating to "Coffee market in Canada". 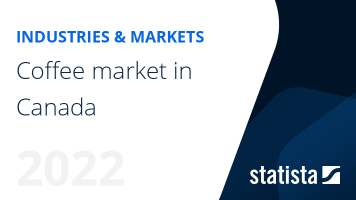 The most important key figures provide you with a compact summary of the topic of "Coffee market in Canada" and take you straight to the corresponding statistics.

Coffee shops and cafes in the U.S.