The need for organic food production emerged as a response to a shift towards the use of synthetic pesticides, fertilizers, and livestock feed additives following industrialized agriculture in the 1900s. Since then, demand for organically produced food has continued to rise. In Canada, 2.4 percent of all agricultural land was used for organic farming in 2020. In the same year, the value of the organic food market in Canada amounted to around seven billion Canadian dollars. The number of organic primary producers in Canada has increased in recent years to reach about 6,000. The province of Quebec produces the highest volume of organic milk of any Canadian province, at almost 612,580 hectoliters in 2020.

In Canada, mandatory certification for agricultural products represented as organic in import, exports, and inter-provincial trade was implemented at the federal level in 2009. The value of organic exports from Canada and the value of organic imports into Canada have both increased in recent years.

Canadian consumers aged between 18 and 24 were the most likely demographic to actively include organic foods in their diet. A recent survey of Canadians showed that 38 percent of consumer do report believing that natural and organic products are healthier than mainstream products. The Canadian sales value of organic packaged foods is forecast to rise to over 1.6 billion U.S. dollars by 2025.
This text provides general information. Statista assumes no liability for the information given being complete or correct. Due to varying update cycles, statistics can display more up-to-date data than referenced in the text. 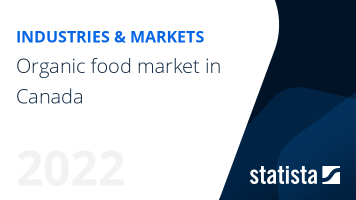 The most important key figures provide you with a compact summary of the topic of "Organic food market in Canada" and take you straight to the corresponding statistics.