Teenage media usage in Germany spans a wide range of devices and types, with digital media consumption generally taking the lead. Based on a recent survey, 89 percent of German teenagers stated they used the internet on a daily basis during their leisure time in 2020, compared to 8 percent who said they did so several times a week. 93 percent used their smartphone every day and 80 percent were listening to music daily. In terms of gender distribution when consuming media, almost all of the surveyed girls and boys used the internet either daily or weekly that same year. Reading daily newspapers and magazines online, as well as reading e-books ranked lowest. In households with adolescents, the majority owned a smartphone at 99 percent, followed by computers and/or laptops.
German teens spent an average of 258 daily minutes on the internet in 2020, compared to 138 minutes 10 years before. Also in 2020, the largest share of time spent on online activities fell on communication and gaming. YouTube ranked highest among favorite internet platforms (including mobile) for teens, followed by WhatsApp and Instagram.

In 2021, the majority of German teens used a TV set for watching content. That year, Netflix and YouTube were the most used video streaming platforms to watch TV shows daily or several times a week, closely followed by Netflix. The most popular TV shows among teens included The Big Bang Theory and Galileo.

Print media usage generally fell in the last decade, especially in the case of magazines and newspapers, though reading books, while fluctuating, mostly stayed within a roughly 40 percent rate. The leading German youth magazines ranked by sales volume were Bravo, Bravo Girl and Mädchen.
This text provides general information. Statista assumes no liability for the information given being complete or correct. Due to varying update cycles, statistics can display more up-to-date data than referenced in the text.

Share of teenagers owning a desktop PC or laptop
76%

Media usage of teenagers during leisure time in Germany 2022

Book reading frequency of teenagers in Germany in 2022 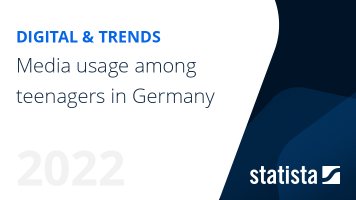 The most important key figures provide you with a compact summary of the topic of "Media usage among teenagers in Germany" and take you straight to the corresponding statistics.