Brands under the Suntory umbrella

Brands under the Suntory umbrella include, besides others, the RTD coffee drinks brand Boss, the soft drink manufacturers Pepsi, Orangina, and Ribena, alcoholic beverages brands such as Strong Zero and Horoyoi canned chu-hi, Hibiki whisky, as well as a variety of beers. Following the acquisition of Beam Inc. in the fiscal year 2014, the company strengthened its presence in the global distillery market. In 2018, through the newly established subsidiary Beam Suntory, Suntory ranked as a leading spirits producer worldwide.

In the following 4 chapters, you will quickly find the 25 most important statistics relating to "Suntory". 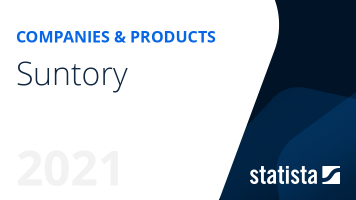 The most important key figures provide you with a compact summary of the topic of "Suntory" and take you straight to the corresponding statistics.