Asahi Group Holdings, Ltd. is a Japanese manufacturer of alcoholic and non-alcoholic beverages with its headquarter located in Tokyo. The company was founded in 1889 by Komakichi Torii as a beer brewing company based in Osaka. Asahi is among the leading beer manufacturers worldwide, accounting for about three percent of the global beer volume sales. As the holding company expanded its business into the food manufacturing and soft drink market, the alcoholic beverage segment remained the largest revenue source.

Brands under the Asahi umbrella

Brands under the Asahi Umbrella include, besides others, the core beer brand Asahi Super Dry, the soft drink manufacturers Calpis and Mitsuya Ciders, the wine brand Alpaca as well as a variety of food brands like Mintia or Dear Natura.

While Japan is well known for its production of high-quality sake, shochu, and whisky, the preferred alcoholic drink of the average Japanese consumer is beer. In recent years, the domestic beer production remained steadily above 2.5 billion liters in total, contributing to Asahi's success.
This text provides general information. Statista assumes no liability for the information given being complete or correct. Due to varying update cycles, statistics can display more up-to-date data than referenced in the text.
Published by C. Diep, Feb 22, 2021 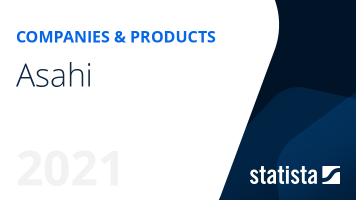 The most important key figures provide you with a compact summary of the topic of "Asahi" and take you straight to the corresponding statistics.