Kirin Holdings Co., Ltd. is a Japanese manufacturer of alcoholic and non-alcoholic beverages with its headquarter located in Tokyo. Introduced as a German-style lager beer brand under the umbrella of Japan Brewery Co. in 1888, the company was established as a separate business in 1907, operating under the name Kirin Brewery Co., Ltd.  The brewery is a major beer manufacturer in Japan and has expanded its branding towards the global market. Even after the expansion into the non-alcoholic beverages and pharmaceutical businesses, the company's domestic alcoholic beverages segment remained the main revenue source.

Brands under the Kirin umbrella

Brands under the Kirin umbrella include, besides others, the flagship beer brands Kirin Ichiban Shibori and Kirin Lager, the popular low-malt beer (happoshu) brand Tanrei, the craft beer brands Yo-Ho Brewing and Brooklyn Brewery, the wine brand Chateau Mercian, the leading black tea brand Gogo-no-Kocha and the coffee drink Kirin Fire.
Furthermore, the holding company entered into a joint venture with Diageo plc in 2009 to expand the distribution of beverage brands managed by the British alcoholic drinks manufacturer. Consequently, Kirin extended its brand portfolio to include the vodka brand Smirnoff, the rum brand Captain Morgan, and the gin brand Gordon, among others.

The Japanese beverage industry can be broken into two distinct categories: alcoholic and non-alcoholic beverages. Alcoholic beverages typically include beer, wine, or spirits, such as whiskey, sake, or shochu. The non-alcoholic beverages industry shows a wider variety, encompassing liquid refreshment beverages (LRB) such as bottled water, carbonated soft drinks, energy drinks, fruit beverages, ready-to-drink coffee and tea, sports beverages, and value-added water.
Large beverage manufacturers such as Suntory Holdings Limited, Asahi Group Holdings, Kirin Holdings Company, and Sapporo Holdings Limited dominate the domestic beverage market. Those companies provide the country with a variety of soft drinks as well as high-alcohol and low-alcohol content specialties, such as beer and beer-like beverages, RTD mixed alcoholic drinks, wine, shochu, whisky, and other spirits.
While Japan is well known for its production of high-quality sake, shochu, and whisky, the preferred alcoholic drink of the average Japanese consumer is beer. In recent years, the domestic beer production remained steadily above 2.5 billion liters in total, contributing to Kirin’s success. Furthermore, craft beer is continuously gaining popularity in Japan,  providing consumers with a large variety of new flavor profiles.
This text provides general information. Statista assumes no liability for the information given being complete or correct. Due to varying update cycles, statistics can display more up-to-date data than referenced in the text.
Published by C. Diep, Feb 23, 2021 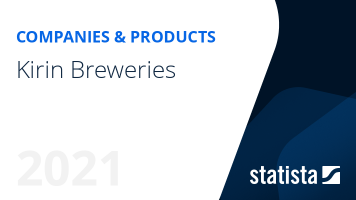 The most important key figures provide you with a compact summary of the topic of "Kirin Holdings" and take you straight to the corresponding statistics.