Published by C. Diep, Feb 23, 2021
Sapporo Breweries, Ltd. is a Japanese manufacturer of alcoholic and non-alcoholic beverages with its headquarter located in Tokyo. Founded in 1876 by the Hokkaido Development Commission in Sapporo, the company became privatized in 1886. Sapporo Breweries is a major beer manufacturer in Japan and expanded its business operations into the real estate, food manufacturing, and soft drinks industries. However, alcoholic beverages remained the main business segment of the company, generating the lion’s share of annual revenues.

Brands under the Sapporo umbrella

Brands under the Sapporo umbrella include, besides others, the core beer brand Sapporo, the beer brands Yebisu, Sleeman, and Anchor, the soft drink manufacturer Pokka, the wine brands Grande Polaire and Penfolds, the major global spirits brand Bacardi as well as a variety of food brands, such as Blue Seal and Soyfarm.

While Japan is well known for its production of high-quality sake, shochu, and whisky, the preferred alcoholic drink of the average Japanese consumer is beer. In recent years, the domestic beer production remained steadily above 2.5 billion liters in total, contributing to Kirin’s success. Furthermore, craft beer is continuously gaining popularity in Japan, providing consumers with a large variety of new flavor profiles.

In the following 4 chapters, you will quickly find the 25 most important statistics relating to "Sapporo Breweries". 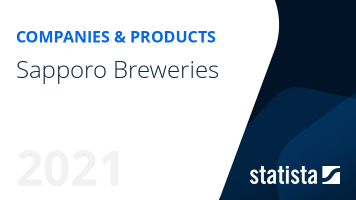 The most important key figures provide you with a compact summary of the topic of "Sapporo Breweries" and take you straight to the corresponding statistics.