The internet has permanently changed our reality. The world wide web provides us access to an infinite amount of information. Since the 1990s, it has redefined the very concept of borders by allowing users to create new ways of interacting. For many, social networks have turned into a vital part of social life. In Colombia, up to 69 percent of the population were monthly active social media users as of January 2020. The largest share of internet users in Colombia are aged between 25 and 34, individuals who have witnessed the emergence and development of these tools at first hand. Despite the diversity of platforms that have seen the light in recent years, Facebook has managed to grow as well as to adapt over time, placing itself as the most popular mobile social network among Colombians and the third most visited via desktop.

More than networks of friends

Social networks quickly became more than a way to maintain and make friends. This medium has also facilitated connections between the public and their favorite celebrities, media outlets and even brands. Colombian music artist Shakira or soccer star James Rodríguez, for example, have accumulated approximately 52 million and 18.7 million followers on Twitter, respectively, from all over the world. In addition to staying in touch with their customers, brands have also found a highly powerful and sometimes cost-efficient marketing tool in social media, allowing them to promote their products and services targeting specific audiences. In Colombia, Bogota’s mass transit system TransMilenio and national airline Avianca have amassed such a large number of followers that they have become the most popular Colombian brands on Twitter.

The era of influencers

Famous people and companies are not the only ones who have taken advantage of these virtual spaces. Ordinary individuals have also gained notoriety through this medium, some even becoming influencers within their communities. As of June 2020, Colombia was the fourth Latin American country with the largest number of Instagram influencers, the majority of which were nano-influencers, with between 1,000 and 10,000 followers. Other video-sharing platforms such as YouTube, or more recently TikTok, are also widely used by Colombian influencers. YouTuber Amara Que Linda, for instance, successfully established her fan base on YouTube and was able to replicate her fame on TikTok, going as far as to reach the category of mega influencer in the micro-video app.
This text provides general information. Statista assumes no liability for the information given being complete or correct. Due to varying update cycles, statistics can display more up-to-date data than referenced in the text.

Latin America and the Caribbean: Messenger users 2022, by country 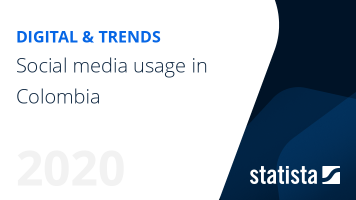 The most important key figures provide you with a compact summary of the topic of "Social media usage in Colombia" and take you straight to the corresponding statistics.