Home to an online population of more than 543.39 million people in 2022, Latin America & the Caribbean is the fifth largest regional social media market worldwide, with more than 306.76 million users of these platforms solely in the subregion of South America. Correlating to an increase in internet penetration, the boom of mobile connectivity throughout the continent is also radically changing the landscape of social media. Although countries in the Caribbean and previously trailing markets like Peru, Paraguay, and Bolivia have the biggest improvements in access to such social networks, countries with the largest online populations remain the area’s biggest social media audiences, with Brazil alone being home to 165.46 million social media users and Mexico to another 98.21 million.

With a penetration rate of around 77.8 percent, Facebook reigns across Latin America and the Caribbean as the most popular and visited social network, with an estimated audience in the region of more than 367.4 million users in 2022. Instagram follows with the second largest number of users in the region and is the preferred choice among digital influencers in countries like Brazil. Meanwhile chatting solutions like Messenger and WhatsApp solidify the hegemony of Meta Platforms Inc.

However, the heyday of the company’s hegemony seems to have come to an end, and new contenders challenge the California-based giant in all spheres. With more than 136.1 million users in Latin America, the video-based platform TikTok claims Latin America as its third-fastest growing region worldwide, with an approximate audience of 136.1 million users in 2022 and 173.3 million by 2025. With around 70 percent of the internet users in Colombia and Mexico being users of the video-based platform, its biggest user base is still in Brazil, although mostly preferred among its audiences in the first two countries.

How do Latin Americans and Caribbeans use social media?

The increasing competition in the social networks landscape is not the only proof of these platforms’ popularity among Latin Americans: audiences across the area spend an average of 214 minutes on social media per day, making it the most popular type of media in Latin America. While liking and interacting with posts from other users are the most common activities performed by these audiences, sending private messages is one of the main usages for social media users in countries like Mexico and Chile, especially with chat apps like WhatsApp and Telegram.

As access to the internet via mobile devices expands in the region, video consumption also grows with platforms like YouTube and TikTok leading the pack. Unsurprisingly, the top YouTube channels with the largest number of subscribers in Latin America are based in Brazil, Mexico, and Chile, although the popularity of Caribbean YouTubers and artists also powers the social media landscape in the subregion.

The more videos, the more space for digital content creators and celebrities: overall, the size of the influencer market in Latin America is expected to reach an estimated 15.6 to almost 17 billion U.S. dollars in 2022, with Brazil leading the influencer market landscape in the region. Although TikTok has been Meta’s main challenger in the area, Instagram remains the platform of choice for more than 94 percent of influencer marketing activities in the country.
This text provides general information. Statista assumes no liability for the information given being complete or correct. Due to varying update cycles, statistics can display more up-to-date data than referenced in the text.

Tiago Bianchi
Research expert covering internet & gaming in Latin America and Spain
Get in touch with us now
Published by Tiago Bianchi, Jan 11, 2023

LatAm countries with the most social media users
Brazil and Mexico

Latin America and the Caribbean: number of social media users 2022, by country

Network with the biggest audience in Latin America 2021
Facebook (362.4m) 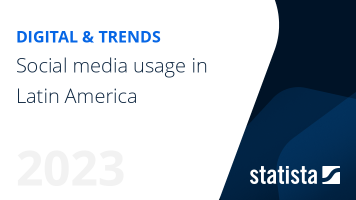 The most important key figures provide you with a compact summary of the topic of "Social media usage in Latin America" and take you straight to the corresponding statistics.