Published by C. Diep, Feb 21, 2022
Retail trade and wholesale are among the largest industries in Japan, with a steady contribution of more than ten percent to the gross domestic product (GDP). While the wholesale market has been stagnating in recent years, retail sales have been on an upward trend with the food industry representing the largest retail segment.

Even though the number of retail stores has been on a steady decline in recent decades, brick-and-mortar stores remain the main points of sale for daily goods and foodstuffs in Japan. At the center of the retail market are convenience stores, commonly referred to as konbini. While the small corner shops are limited in their range of products, the dense store network caters to the busy lifestyle in the country, allowing for spontaneous and fast shopping trips on the way.
On the other side of the spectrum are large retail establishments such as shopping malls, department stores, and large specialty retailers, which predominantly specialize in the distribution of non-food products. However, with large e-commerce enterprises such as Rakuten and Yahoo broadening the product and service availability in their respective marketplaces, traditional retailers are struggling to defend their market share against the convenience of shopping around the clock.

While the high disposable income of consumers offers an attractive market with high potential, foreign retailers are struggling to enter the Japanese retail market. As successful domestic brands are enjoying the trust of consumers and the efficiency of tightly woven supplier networks, large foreign entrants such as Walmart or Tesco have reported their failed attempts to penetrate the rigid retail structure.
Among businesses successful in garnering consumers’ attention, online platforms are gaining traction. The online marketplace Amazon has successfully expanded to the Japanese market, competing against domestic enterprises for the position as the leading e-commerce site in Japan.

In the following 6 chapters, you will quickly find the 33 most important statistics relating to "Retail trade in Japan".

The most important key figures provide you with a compact summary of the topic of "Retail trade in Japan" and take you straight to the corresponding statistics. 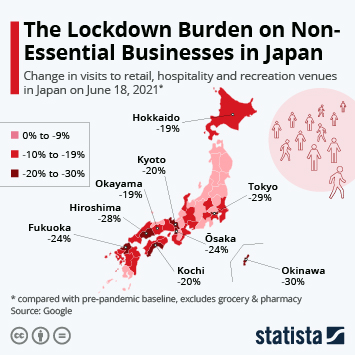