Naver Corporation is one of the ten biggest businesses in South Korea. As one of South Korea's largest web portals, the conglomerate provides a variety of internet services, such as mobile messaging, digital comics and novels, social networks, blog platforms, mobile payment systems, and more. However, Naver is most well-known for its web search engine which is not only a domestic favorite but also the main source of Naver’s operating revenue.

Naver was first established in 1999 before it merged with gaming portal Hangame in 2001 to become NHN (Next Human Network). It took on the name of Naver again in 2013 after restructuring, while NHN Entertainment was to take over the gaming platform and NHN Japan became Line Corporation.
With the multiple services offered, it comes as no surprise that Naver engages in multiple M&A transactions. In 2020, Naver successfully acquired the leading platform for web novels, the Canadian website Wattpad, to expand its content segment.
That content segment is the only one that has been largely untouched by Naver’s revenue category change in the third quarter of 2020. This was done to reflect the business integration of LINE-Z Holdings and the company’s business strategy. While the former “ads” and “business platform” categories merged to become the search platform segment, a completely new introduction was the commerce segment. It contains all revenue from paid memberships, commissions, and shopping-related services, such as Naver Shopping, one of the most popular online shopping platforms in South Korea.

In the search platform sector, Naver‘s biggest competitor is internet giant Google. This is true for the actual search engine, as well as Google’s web browser Chrome. In all other segments, Naver’s biggest competitors were domestic, namely Kakao Corporation and Daum. These companies merged in 2014 and provide the same or similar services as Naver.
Kakao launched its payment service earlier than Naver and has accumulated a large number of KakaoPay users. As digital comics, also called webtoons, have gained popularity internationally, both companies are competing to be the leader, in both the domestic market and abroad.
Kakao Corp. is also the operator of KakaoTalk, which has become the most popular mobile messenger in South Korea, with almost every South Korean using that service. Naver’s messenger service LINE has not been able to dominate the South Korean market. However, there are a significant number of LINE app users in Japan, and it is heavily used in other Asian countries, such as India, Thailand, and Indonesia.
This text provides general information. Statista assumes no liability for the information given being complete or correct. Due to varying update cycles, statistics can display more up-to-date data than referenced in the text.

Nina Jobst
Research expert covering South Korea
Get in touch with us now
Published by Nina Jobst, May 2, 2022

Most used search engines in South Korea 2021, by MAU 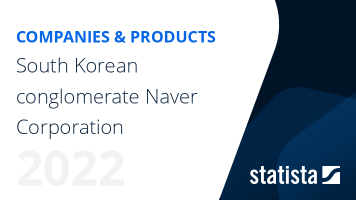 The most important key figures provide you with a compact summary of the topic of "Naver Corporation of South Korea" and take you straight to the corresponding statistics.